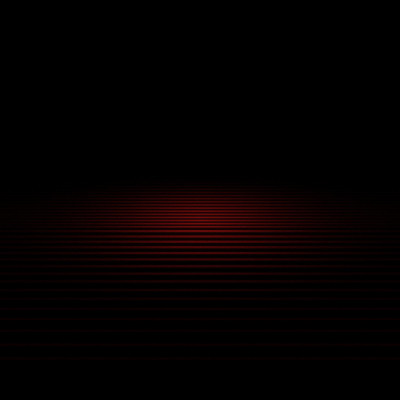 Pelican’s Larry Herweg and 5ive’s Ben Carr unite as INTRCPTR; a turbo-charged Post-Metal venture with a Stoner/Desert vibe. As a big Pelican fan, I’ve been keeping an eye on this concept for a while with a lot of expectation, and it certainly doesn’t disappoint. Larry’s energetic drumming provides a vast canvas for Ben to probe, his guitar-work not dissimilar to his work with 5ive; perfect for the fuel-injected style of this new project.

Mad Max came to mind when I first heard the band’s title last year, echoing the V8 Interceptor vehicle made famous throughout the movie franchise, along with the band’s original artwork linked to the project; that of a beaten, blue muscle car. They’ve certainly pursued this territory and painted a vivid, desert backdrop; thrusting you into their high-octane world from the outset.

‘Nightrider’ is a direct opener; instantly establishing the record’s breakneck pace. A repeating, meaty guitar riff throbs in the subconscious, gaining clarity and rising in volume. It stops momentarily on a drum beat, then throws us down a barren highway at full throttle; fierce, rasping guitar lashes the crushing drums like an angry rattlesnake.

Pressing harder on the accelerator, we’re plunged into ‘Sandstorms’. A whirlwind weaving mesmerizing moments as the guitar twangs furiously, before jolting back into the venomous rhythm kept by the drums. The music changes gear and speed frequently without easing the awesome barrage of sound.

The longest track ‘Ruby’ clocks in at just under 6 minutes, giving the guys time to sit back and unwind. Softer guitar cruises along for a whole minute before the drums enter, adding to the sweet, dazed tempo; a nice touch, giving the impression the duo are jamming at this point. It’s not long before we drift back into heaviness at the track’s core, as the pairing’s chemistry and distinctive styles begin to melt into a single form.

‘Turbines’ tightens it right back up, as the brief intro opens into familiar fast-paced stretches, mounting periodic crescendos, then collapsing back into a steady, hefty rhythm. If they aren’t satisfied already, the outstanding heavier sequences on this track will surely quench the thirst of Pelican and 5ive fans alike.

Final track ‘Watchmaker’ is a more reflective piece and delivers suitable closure to the record. A familiar crushing opening gives way to aching, entrancing segments, which break through at the track’s midpoint like a distorted mirage, appearing for a moment, then vanishing as the track reforms back into shape for a pummelling finish.

The Post-Metal veterans produce a powerful first record and it’s refreshing to hear some new material from both members; the arid landscape they depict, fully realized in its brief 21-minute run-time. Hopefully it won’t be long before we’re exposed to more of INTRCPTR’s punishing desert wilderness. Released through Magic Bullet Records, ‘I’ is available as a digital download now via the band’s Bandcamp page.