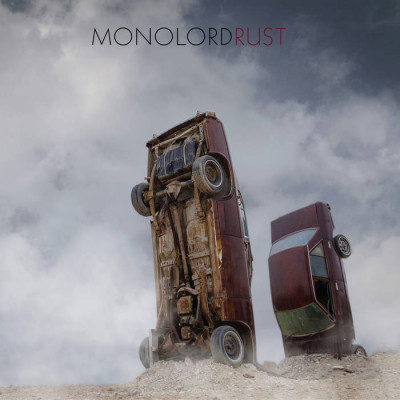 "...if there is a plan it is to be more selective but at the same time relentless."

We’ve been huge fans of Monolord at E&D Towers ever since they first destroyed our speakers with 2014’s Empress Rising. As they toured the UK recently, Steve Fallows managed to talk to Monolord guitarist / vocalist Thomas V Jäger about a few things including their meteoric rise in the doom scene and also about touring and future plans.

(((o))): Hello. Thanks for talking to us, can you tell us a little about the new album?

The new album is what came out of us at the time. More or less based on the everlasting fight we have with religion and with the growing amount of stupidity around the world. This album,”Rust”, feels a bit different to the other two albums. But maybe that is just in our heads, not the listeners? There are still 15 minute songs, but also some hard hitters. Really interested in what the listeners is gonna say about the instrumental track, “Wormland”. Inspired by the old Swedish folk songs I find it very beautiful and a bit unexpected.

(((o))): Have you approached this recording any different to previous efforts?

Not really no. We had 7 songs, ditched one of them and rehearsed and recorded them between tours. Still recorded by us in our rehearsal room, again with lots of good coffee and bad jokes.

(((o))): You use your own studio for recording. As well as the money saved from hiring studios to record, what other advantages does that have?

It is convenient yes. The downside is that our room is very small. Too many amps (haha not really). But we know what the room sounds like though and that is an advantage.

Sometimes it is good to be close to home, sometimes it can be distracting. Next time we might do something different. We´ll see about that.

(((o))): You have become quite prolific in recording and touring since breaking onto the scene. Has that been the plan, or have things just snowballed quickly?

We realized pretty quick that we are on to something and that our fanbase is growing. This makes us motivated! Luckily I have had a constant flow of ideas for a bunch of years, and when we have rehearsed them for a while and when we have enough songs for another album, we decide to record them. So yes, snowballed is a good description of how this turned out. But if there is a plan it is to be more selective but at the same time relentless. There are also tons and tons of demos and ideas just lying around, waiting to be used. Like wine, riffs often get better with age.

(((o))): You recently completed your first full UK tour. How did that go?

We heard some stories about touring UK that are not very flattering to be honest. But we were blown away by the respons we got. With London as the highlight with the biggest venue and a bunch of good friends and fans came that night and made it a night to remember. But all the gigs in the UK were really really good. Can´t wait to come back!

(((o))): You were in the country (and indeed Manchester just a couple of days after) around the time of the Arena bombing. Did you notice a change in attitudes and atmosphere at shows after that event?

We played in Manchester the day after it all happened I think. We read all about it and we were wondering if the promoter would cancel it or not, but luckily not. Also, we got messaged during the day from people that was wondering if we would still come and play. It was more important than ever to play that night and everyone there, including us, felt that our gig that night was something special At least I think so. There was a lot of hugs and good conversation after that show.

When I sang “We Will Burn” that night, I got goose bumps all over my body and a cold shiver down my spine. It is like it all came true. We need more compassion and love in this world, if we don’t, we will all burn.

(((o))): Your touring has taken you all over the world in a very short space of time. Where is left for the band to conquer?

Well we have not played in Japan yet! Or China, or Indonesia, or South America! So there are plenty more areas to cover before we are done! We have the co-headline tour with Conan coming up this fall and after that we have a bunch of shows in the works. We need to go to the US again of course. “Touring touring is never boring” as a band once said.

(((o))): I saw in another interview that you have all since given up your day jobs. Does it feel any different that the thing you have loved doing for so long is now your job?

That is not entirely true. I quit my job for various reasons and take work by the hour when I can. Esben is a freelancing sound engineer and Mika is working in a warehouse.

I am more broke than ever but I manage. I have more time to be creative and I am slowly building my own studio in my house and I am expanding my own webshop where I sell patches and t-shirts and stuff. Monolord is like a full time job but it doesn’t pay that way. At least not yet. It would be fantastic if it could.

(((o))): I have spoken to other Scandinavian bands about what make that part of the world so prolific when it comes to heavy music and they have mentioned the way that the arts is supported and kids encouraged to learn instruments is a huge benefit. Is that still the case?

It is still that way but since we have a more mid to right wing influenced government, music and arts are not really considered as important compared to the money making machines. They are slowly cutting the funds more and more for these things and it gets harder and harder for artists. That is why i always try to help younger bands. Right now I am recording a band to try help them getting there music out there and I always try to help out in the ways I can. I have daily discussions online about guitar sounds, amps, strings, tour advice and so on. I am just glad to be in a position where I can help out.

(((o))): What other bands from Sweden are coming through that you think people should check out?

The new Snailking release sounds promising from what i have heard. I know our dudes in Mammoth Storm have a new album in the works (they need a new label though, *cough*) Alastor released a cool album a while back!

Touring with Conan in October, then a possible tour a bit closer to home, working on a couple of new songs and hopefully there will be a Monolord coffee blend to enjoy… Stay tuned for that!