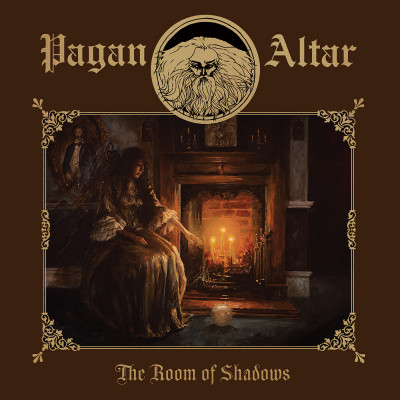 The Room of Shadows by Pagan Altar

Sporadic is the word which most readily describes Pagan Altar’s release schedule. Formed almost thirty years ago in the late 1970’s, their debut album eventually emerged in 1982 at a time when the creative rock and metal explosion that was the NWOBHM was in full swing. Pagan Altar stood apart from the plethora of that era’s bands by virtue of their distinctive, almost unique, style which has, with the passage of time, come to be revered by many aficionados of doom and classic British heavy metal. It took until 1998 for their debut to be released on CD but its eventual manifestation stood as a testament to the status the material had attained in the intervening years of underground sharing and bootleg reproduction. It then took until 2004 before the emergence of Lords Of Hypocrisy, a second album released almost a quarter of a century removed from the band’s formation, but in reality being new recordings of songs originally written between 1980-83. Further albums The Time Lord and Mythical and Magical landed within two years, marking the most fertile release phase of Pagan Altar’s existence.

The Room Of Shadows was originally written thirteen years ago and finally sees the light of day two years after the death of vocalist Terry Jones who, along with his guitarist brother Alan, constituted the membership core of the band since its inception. Pagan Altar’s history is suggestive of a quest for perfectionism at the heart of the brothers’ work and fans of the existing canon should be delighted to learn that the new record is undoubtedly comparable in quality to their very finest moments.

I have read comparisons of the vocals of Terry Jones to those of Ozzy, Biff Byford or even Bon Scott. However, while there is a higher-register timbre in common, it is a disservice to Jones to describe him as anything other than a genuinely distinctive and supremely talented individual. His intonation and theatricality function as the perfect foil to the atmospheric grandiosity of the music. Terry’s performance over the 45 minutes of this album stands as a fitting epitaph to the abilities of a great rock singer.

The Room Of Shadows comprises six main tracks and an additional, short outro. Each is a thing of beauty. Terry’s evocative vocals soar and intertwine with the flowing, melodic guitar riffs and solos delivered by his brother Alan. Elements of folk or classical can be felt but the foundation is of classic rock in its finest sense. ‘The Portrait Of Dorian Gray’ and ‘Dance Of The Vampires’ may be my favourite tracks at present, but each listen reveals further depth and provides uplifting confirmation that this is a wonderfully complete and rewarding listen.

A sense of tragic beauty infuses this album. Should The Room Of Shadows be the last we ever hear from Pagan Altar then it stands as a most fitting denouement by a band whose abilities far transcend their limited commercial success. It is to be hoped that the critical appreciation, which always seems to have lagged behind the originality and consistency of their work, can continue to evolve since this new release only complements a body of work which deserves to be heard – and hugely enjoyed – by a much wider audience.