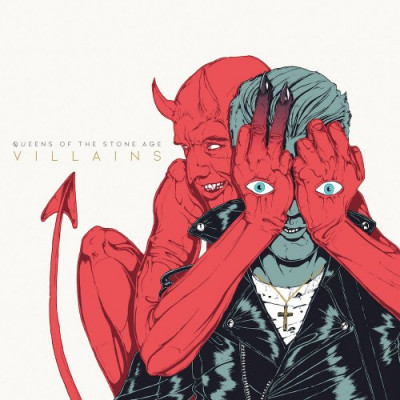 Villains by Queens of the Stone Age

Lo and behold, a new Queens of the Stone Age album! It took Josh Homme and his musical collective four years to come up with a suitable successor for the critically acclaimed Like Clockwork. Various members were involved in side projects like Gone Is Gone and Homme himself recorded an album with Iggy Pop called Post Pop Depression among other projects. For the recording sessions of Villains Homme enlisted the help of producer Mark Ronson, mainly known for his work with Bruno Mars, Adele and Amy Winehouse. This news certainly made some waves within the band’s fanbase…

Josh Homme isn’t the type of musician who particularly cares for tradition or sentiment and that’s exactly what gives Queens of the Stone Age its musical edge. Don’t worry, Villains isn’t a full blown pop music album in the vein of the aforementioned Bruno Mars or Adele. It doesn’t have the dark feel of Lullabies To Paralyze and Like Clockwork nor the frantic and often chaotic jam feel of Songs For The Deaf. This time around it’s all about the songs, memorable hooks and pop music sensibilities included.

Within the rock community “pop music” is often regarded as a dirty word. However, there’s such a thing as “intelligent pop” as Steven Wilson (Porcupine Tree) so eloquently coined the term. Music that’s pleasing for the ear, yet still retains intelligent arrangements, musical substance and delicate layers. Villains is such a record. Variation is king here, from the funky feel of ‘Feet Don’t Feel Me’ and ‘The Way You Used To Do’ to the multi-layered and adventurously arranged ‘The Evil Has Landed’ and ‘Villains Of Circumstance’. ‘Domesticated Animals’ and ‘Fortress’ are more traditional in nature and could easily been included on later day albums like Era Vulgaris and Lullabies To Paralyze.

Another strong point of this album is its concise and meticulous nature. Everything is there for a reason and it doesn’t overstays its welcome. Villains is as straightforward and honest as it gets. It’s all about the band and the songs. Perhaps that’s Mark Ronsons’s biggest contribution to this record, besides its smooth production and the occasional flirtation with modern pop.

If anything, Villains is the band’s smoothest and leanest effort to date. Some of the older fans may lament the band’s current musical direction, but it’s unlikely Josh Homme will care much for such sentiments. Queens of the Stone Age has come of age and Homme and co aren’t afraid to take changes. This is exactly why they are such a relevant and viable force in today’s musical landscape.