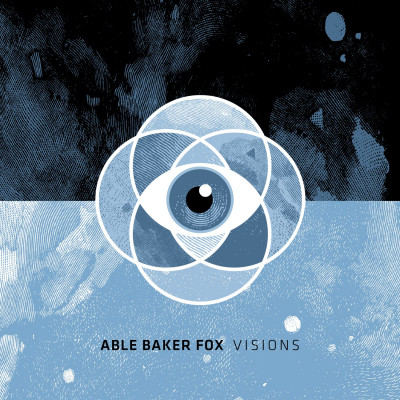 I still recall first hearing the news that members from two of my favorite rock bands had consolidated to write and record an album under the moniker Able Baker Fox.  After Small Brown Bike and The Casket Lottery released a collective EP, the chemistry was natural, yet new.  ‘Voices,’ their first release was, and still is, what I hoped it would be: A ferocious collection of Small Brown Bike-esque tunes with the addition of Nathan Ellis’ skilled guitar work and assertive vocals.  From beginning to end, 2008’s collection of gritty rock tracks is an absolute must for anyone who appreciates melodic and driving rock music.

Fast forward nine years and ABF is back with their second full-length record, Visions.  Like their first record, Visions was recorded in only four days.  With the members being scattered around the Midwest and East Coast, preproduction was nonexistent, while the writing was forced to be patient and distant.  Ideas were traded via e-mail, layered upon, and sent back between Ellis and the Reed brothers.  With only a weekend of rehearsing before the recordings, Able Baker Fox, along with producer/engineer J. Robbins, completed tracking instruments in just two days, and vocals in another two.

Visions is 11 tracks of confident, powerful rock progressions.  Fifteen seconds into the opener, ‘Purple Mountains,’ I’m immediately swinging my head with a grin.  I’m instantly shown that the near decade hiatus only bridged the band, making Visions a mandatory continuation from its predecessor.  Tucked away behind the band’s history of instrumentation are the endearing and emotional lyrics of the band.  With a constant value on the importance of family, respect and support, Reed roars “problems in this place I love can be overwhelming/promises in this place I love can go undeserving, but hope remains in my arms and it’s worth preserving.”

The stand out of Visions are the influences and styles that seep into it.  Heavy guitar lines, haunting vocals, punk rock roots, rare chord changes and sing-along melodies flow throughout this record.  The experiences of each musician, collectively and individually, are more apparent than ever.  The guitars support and never get in the way of one another.  The rhythm section of Jeff and Ben are either creating a support for the guitarists or completely driving a track on their own.  The band is obviously at its strength when they’re a single component, but there is a constant theme of respect for each other, whether musician, friend or family.

Tracks such as Purple Mountains and Drift are immediately easy on the ears, but Visions didn’t hit me as quickly as Voices did.  I was uncertain of its direction after the first listen.  I wasn’t sure if each track belonged, and if each idea worked.  Some of the best albums are the ones that demand patience; works that require more involvement from the listener.  With each listen and each ounce of emotion engaged, I found ABF’s dissonant guitars, mature time signatures and air tight bass and percussion an amazing experience.  This is a great balance of who Able Baker Fox is and who they’ve become.

Aside from a handful of shows, will we see more Able Baker Fox in the future?  One thing we do know is that they relish the opportunities they’re given, time spent together and the music they’re able to create.  Voices leaves us with the statement that “there’s not enough love/not enough trust/not enough truth to make me want to believe.”  It’s a clear indication that the band is continuously searching for more positivity in this world and, as listeners, we are fortunate to be a part of it.