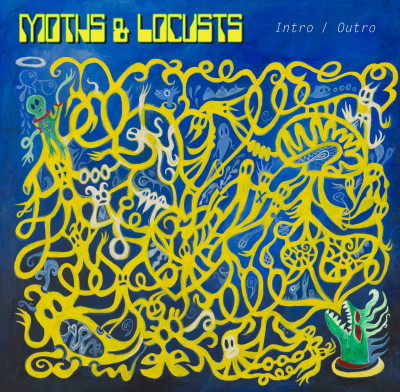 Moths & Locusts will release its third full length album, Intro/Outro, on October 6th. The band has become known for sprawling hypnotic psychedelic experimentation and this acid trip of an album is no exception. Listeners drawn in by ambient misdirection will find themselves immersed in a smoky morass of wild strangeness. At times, it is like a stay in a hot-house séance, tribal and hypnotic, and other times like a very strange dream. The band excels at creating soundscapes that are not easily tied to some existing context, the mark of true experimentation. That said, there is enough to tether the listener – traditional instruments, big fat bass and some really nice beats – that, as far removed as it all sounds, the album is highly organic.

Is it a great album? The record is better described as one amazing 13-minute song cut into two pieces and interrupted by a lot of experimentation that is interesting, but often a little too weird to engender much of a lasting emotional response. That comes with the territory, though. That’s why it’s called experimentation. The same is true of albums by some of the best known experimental bands like Grails or Bardo Pond. That said, ‘Acid Cloud Part 1’ and ‘Part 2’ are freeking awesome! I would have no problem sitting in a room and doing nothing all day but listening to those two songs over and over. They are near perfect works for those seeking music to zone out to.

And therein lies the true purpose to this album – to do drugs to! The band’s washy noisy transitions from one theme to the next and the way themes build and ebb are the perfect complement for a dime bag, delivered pizza and hours on a couch contemplating random shit. This is a record your mother should not allow you to have. While there are no explicit lyrics, there should be a warning on the cover. It will make you want to get high. And, as everyone knows, getting high is the short road to flunking out of school and devil worship. And devil worship will make your poor mother sad.

On second thought, fuck your mother. Life’s short. Get this album and get high.