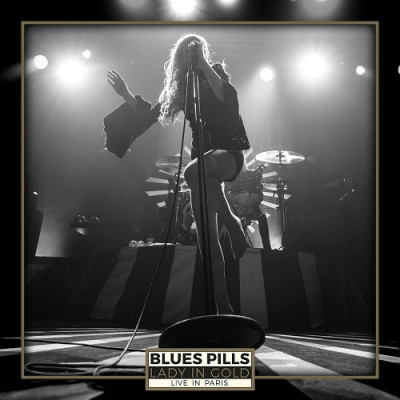 Lady In Gold: Live In Paris by Blues Pills

Lady In Gold: Live In Paris is not Blues Pills’ first live album – thanks to the bonus material available with the deluxe editions of their two studio albums, it’s not even their first officially released live concert film – but it is the most lavishly prepared of the live material that has seen the light of the day to date. The Swedes have built a formidable reputation as a live act – in fact their live performances were the stuff of legend long before they signed to Nuclear Blast and their eponymous studio album was released – and on the basis of this latest release it’s not hard to see why.

Understandably, the bulk of media attention that the band has received has centred on Elin Larsson, the band’s statuesque vocalist. Vocalists tend to be the focal point of any band, but as Larsson and others have discovered, this can be a double-edged sword. All too often, the band have lived and died based purely on perceptions of Larsson, which is a pity for both the other band members – who deserve better than to live in the shadow of their frontwoman – and for Larsson herself, whose formidable talent deserves to be acknowledged without the usual and increasingly tiresome subtext about “women in rock”. Without digressing into a further debate about the representation of women in music by the media, Larsson’s performance here is the best possible riposte to those critics who seem unable to see past her appearance. Effortlessly charismatic, she is an irresistible frontwoman, and her extraordinarily powerful vocals are hugely impressive throughout. She’s equally at ease with high-octane rockers and the stark balladry of songs like ‘I Felt A Change’, and clearly relishes live performance. A tornado of flailing limbs and blonde hair, Larsson owns the stage from the moment she walks onto it.

If Larsson is plainly having a great time, the rest of the band are just as energised. Guitarist Dorian Sorriaux is on fire throughout, turning in some outstanding solo turns during the likes of ‘Black Smoke’, non-album track ‘Bliss’ and a somewhat extended ‘High Class Woman’, and the rhythm section  – bassist Zach Anderson and drummer André Kvarnström – are balls of energy throughout. The core band are augmented on stage by guitarist/keyboard player Rickard Nygren, who brings a similar rock ’n’ roll energy to his performance – his keyboard playing is exuberant and his evident enthusiasm contagious. Blues Pills relentless touring regime has evidently been the perfect preparation for this recording. The set is a high-energy affair, many of the songs melding together in mini-medleys: the band start playing at the beginning of the gig and barely stop for a breath for the rest of the evening.

Sonically, the album is pleasingly raw. Live albums can be too polished; here, the crowd are high in the mix and the rough edges of the band’s performance have not been sandpapered away. Live recordings can often feel presented very much from the band’s point of view, where the listener almost feels like they’re standing on stage looking out at the audience. This record feels more like a performance presented from the audience’s point of view: close your eyes, and you could almost be there, standing amidst the crowd in Le Trianon in Paris, watching everything unfold. The effect is highly involving; you can almost feel the heat of the venue and the unmistakable thrumming of the PA.

For those who opt to pick up the DVD or Blu-ray formats of this release, the general sense of immersion is even stronger, close-up shots of the musicians notwithstanding. The generally relentless energy of the band’s performance is staggering. It’s obvious in the case of the indefatigable Larsson, who scarcely stops moving for a second even between songs, but the band work equally hard throughout, especially drummer André Kvarnström who seems to be having the time of his life – or a stroke, or perhaps both. Happily, the film largely avoids the typical ADHD editing that we have come to dread seeing in concert films, favouring close-up work that showcases the band very effectively. There’s also a pleasing amount of footage of the delirious audience that speaks volumes about just how loved this band have become.

Whilst Lady In Gold: Live In Paris may be unlikely to sway the opinions of those yet to be seduced by Blues Pills’ undeniably vintage sound – Led Zeppelin, Cream and early Black Sabbath are all evident musical touchstones for the band – it’s an almost perfect showcase for their existing catalogue. Enjoyable as their studio output has been, it can sound a little polite and understated at times; here, shorn of its studio sheen and in front of a partisan audience, its energy is palpable. For existing fans, then, this is either perfect consolation for missing out on seeing the band on tour or the perfect souvenir.