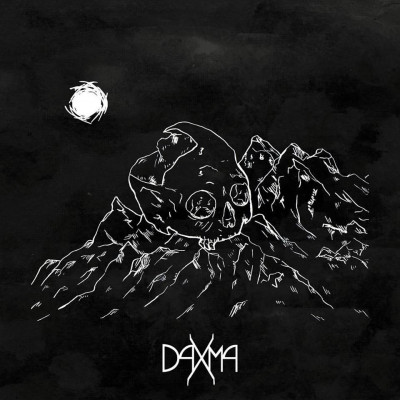 The Head Which Becomes the Skull by Daxma

At the start of ‘Birth’, the first song on Daxma’s debut LP The Head Which Becomes the Skull, we are given a neat summary of what we are to expect over the next 50-or-so-minutes. Gentle guitar strumming punctuates a drawn-out, almost droning violin melody. A steady drum beat moves in to develop movement and, when we are almost acclimatised to this, distorted guitars explode into frame, pushing the violin melody into an unexpected, and quite beautiful, urgency. The intensity increases, but only for a bar or two before we find ourselves again in the calm waters of the introduction.

Over the course of this first 10 minute song, we are treated to controlled guitar feedback, emotive drum fills, and a carefully developed melody. The overall tone is melancholy, but laid back, heavy, but not rage-filled, we aren’t being dragged up a mountain with this music, we’re walking, alone and introspective. The warm production allows the music to envelop the listener and every instrument pops.

Daxma (pronounced dahk-mah, a word for a Zoroastrian ritual of the dead, an unarguably cool name), a five-piece from Oakland, California, wear their influences on their collective sleeves. The gently-developing melodies of Godspeed You! Black Emperor rub shoulders with the heaviness of SubRosa or Year of No Light with surprising ease in this album. For what this album is, is a love letter to post-rock in the language of metal. Listeners looking for a witches’n’demons style doom, or an angry, abrasive sludge record aren’t going to find that here. Like the bands above the tone and timbre of the instruments is explored with glee, guitar chords often held, feeding back, simply for the sheer joy of it.

Vocals, shared between three of the members, keep the lyrical part of the record interesting. The lyrics, as is traditional in post-metal, are buried deep in the mix so serve to provide an overall atmosphere, preferring not to dominate the songs. The similarities with SubRosa are most evident in this area, with strong performances from all singers, especially on the title track, which features some fantastic vocal harmonies (chanting the strangely hopeful refrain “Amen, the thunderbolt in the dark void”). The themes seem to be about attempting to face a threatening and unfriendly world philosophically. The overall effect is welcoming rather than alienating which I like; a sort of “we’re all in this together” vibe. Similarly the melodies aren’t particularly grim, if anything they veer either sorrowful or uplifting. In that sense there is a definite similarity to bands like God is an Astronaut or Pelican, but with a doom sensibility keeping it firmly in the shadows. Subtle use of sampling give the record a scope and maturity which I wouldn’t have expected from a band this new.

Now, after four paragraphs you might be getting a little impatient with me, so I’ll just say what I think. This record is exactly up my street, it’s melancholy, melodic, heavy, and mixes quiet and loud with confidence – this is hypnotic, patient and carefully constructed music. It was almost made for listeners with my tastes. However, if this kind of introspective post-metal stuff isn’t your thing, then I doubt this record will change your mind at all. As a first full-length release, their influences shine through clearly, so whether or not you like this will be largely based on if you like those influences. As an example of the genre this would be a great introduction, and the strength and confidence of the melodies and variety between songs make multiple listens rewarding. Daxma are definitely a band to keep an eye on and I very much look forward to seeing what they produce in the future.