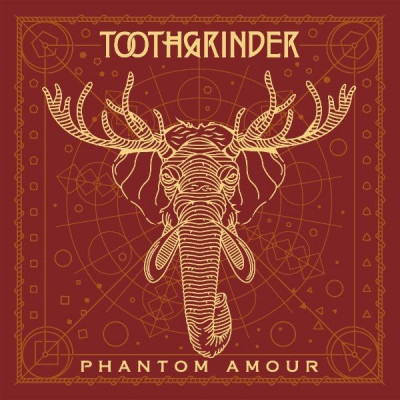 Not every musician “grows” within their music. Some find a comfortable niche and snuggle right in. Others stick with a certain “formula” and right basically the same music all the time (see AC/DC). Then there are the artists that can’t stand to be contained. Some can take a hard left when changing their sound (see Suicide Silence recently), others take a longer, more progressive (ahhh, see what I did there!) arc, allowing their sound to slowly evolve from album to album. Such is the case with the Asbury Park, NJ band Toothgrinder. After only two EPs and one full album, it’s already easy to hear the quintet push themselves into different musical directions. Their latest offering, Phantom Amour, comes to us courtesy of Spinefarm Records on November 10, 2017.

Toothgrinder’s previous release, Nocturnal Masquerade, was one of my favorites in 2015. Its schizophrenic spirit keeps the listener on their toes. Phantom Amour does also, but in a different way. Vocalist Justin Matthews read Stephen King’s On Writing four times before going into the studio. He took King’s concept of being fearless into consideration when righting the lyrics for the songs on Phantom Amour. This definitely translated into the different song structures Toothgrinder is working out this time around. Lead off track ‘HVY’ is an immediate indication of how different. The chugging, industrial guitar distortion in the beginning of the song only last a few bars before Matthews’ soothing clean vocal guides you through the bouncy melodies. His familiar savage scream/yell doesn’t come in until towards the end, but it’s gone almost as soon as it appeared.

‘The Shadow’ starts out familiar enough, albeit more groovy, but this again transitions quickly into something more melodic and flowing. ‘Let It Ride’ pushes in a sweet shuffle groove, making it easily one of the most fun tracks on the record. These first three songs encompass the scope of Phantom Amour. Most of the tracks are going to give you heavy riffs, pocket grooves, and a mix of Matthews’ heavy and light vocals. Then there’s ‘Jubilee’. As if the rest of the album didn’t already employ a “no limits” thought process to songwriting, this acoustic track with brushed drums, clean vocals, and banjo screams IDGAF.

As the band’s press release starts, “When nothing is off limits, you can reach your full potential.” What a mantra for writing music! The band was already pushing its musical boundaries with Nocturnal Masquerade, but Phantom Amour blows them away. After this, Toothgrinder’s musical future has to be wide open. Phantom Amour just became my favorite Toothgrinder album, not in spite of its differences, but because of them.