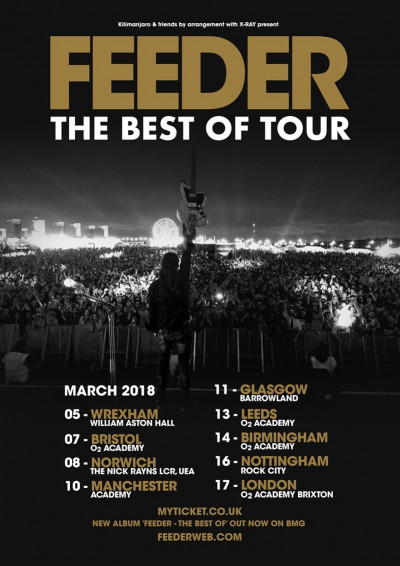 As part of their 21st anniversary, 90s’ rock band Feeder took to the stage at the Brixton Academy on 17 March, ending their eight-date run of shows. The band has recently released a “Best of” album, alongside new record Arrow, which includes their latest single ‘Figure You Out’. Feeder first set foot on the Brixton Academy stage in October 1999 and this is the first time we’ve been able to welcome them back for five years.

A 21-year run is something a lot of bands never achieve, and there have been moments in Feeder’s somewhat potted history that it seemed that they too would hang up their axes and call it a day. Luckily for all of us Feeder fans, it never quite happened.

I must confess to having been a big fan of the band, first listening to them when I was 14, some 17 years ago, and Echo Park saw me through some pretty rough times back then – something I will always be grateful for but not having kept updated (sorry, guys), I was excited to see if they still had it, or if this was another example of a group that should have walked away gracefully years ago.

As soon as they took to the stage it was clear that they still absolutely had it. Looking a little more weathered than I remember (understandably) but still good for 50, Grant Nicholas and Taka Hirose received a resounding cheer of welcome before launching into opening song ‘Feeling a Moment’. I was surprised to see that rather than the three-piece power trio I was expecting, they had expanded the line-up into a five-piece that included a second guitarist and a keyboardist/backing vocalist; but Feeder have arguably never been a band to focus too heavily on the past, so this departure from their roots (even on this anniversary tour) isn’t as out of place as my initial reaction made it feel.

Sticking with the Pushing The Sense album, their second track, ‘Shatter’ followed seamlessly on from the first and the seasoned professionalism of the group came across in this and the many other occasions that their set flowed from track to track with no pause. This constant flow of music gave the performance an extra energy and sense of urgency that, if the frenzied mosh pit is anything to go by, radiated from the stage and into the crowd.

The first half of the set remained dominated by the post-nineties parts of Feeder’s repertoire until they took a brief pause for Nicholas to recount the story of how, when living in Camden, he played his (now) wife a song that made her cry because she was so happy he had written something that she felt would be a big hit. A beautiful backstory to the song ‘High’ and a nice touch to the set.

In some ways, it was a little surprising that there weren’t more stories about how the songs came to be, or tales of the band’s past, and I did feel for a lot of the set that it was a standard gig rather than a 21-year round-up of the band’s achievements. I was particularly surprised I didn’t see or hear any great mention of their former drummer Jon Lee, unless it came at an ill-timed bathroom break or something similar, and would have expected ‘Piece by Piece’ in the middle of the set to be dedicated to him – mid-way through, perhaps, to leave time for happier thoughts afterwards.

Lack of stories notwithstanding, Nicholas was as charming and personable as ever, offering encouragement to the mosh pit in hope of getting it “90s’ style”; and while it would be expected that at a concert for a band that have been writing and performing for 21 years the audience would be warmed to them automatically, Nicholas really did have the crowd with him, clapping, waving and singing along at his request. His open, friendly stage demeanour made it feel like we were at a party in his house, and who wouldn’t grant the request of such a genial host? Vocally, he’s lost little of his power and range over the years, although I would swear that he sang a lower melody line to a couple of the songs. Almost the harmony rather than the lead line. And I did wonder if they key had been changed to a couple of the songs, as well, as they sounded slightly different somehow. I’ll never know.

The set, naturally having a hit-heavy selection, ended with the only song it could end with: ‘Buck Rogers’; and Nicholas started the song with a stripped-back and slowed-down rendition of the first verse that was a great version. The song didn’t kick straight in with the full version, which was a shame, but it did come shortly after and the crowd went predictably wild.

Not to cheap us out, the 19-song main set was then followed by three acoustic encore songs and a further four full-band songs, with the last song, one of my personal favourites, ‘Just A Day’.

I could write a whole lot more about this gig – and it’ll be one I don’t forget for a very, very, long time – but I’ll sign off with one last thing: 21 years of Feeder have passed but they certainly aren’t past-it, yet. Here’s to many more.