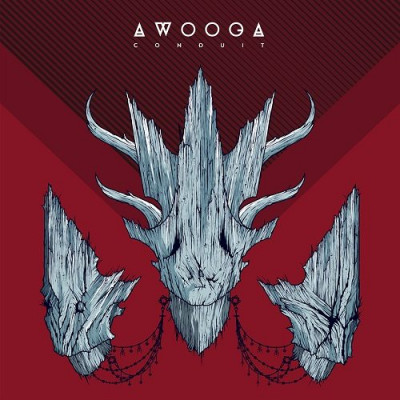 Sheffield based rockers Awooga have been steadily building a name for themselves for the last five years. Playing regular live shows, they finally made their transition to the studio for their debut release, the Artifacts EP, released in 2014 to generally enthusiastic reviews. It was followed by the Alpha EP last year. Conduit is the band’s first full-length record, and it packs a lot into its 40 minute running time.

The Alpha EP attracted some minor criticism for being a little one-paced, and it is a criticism that might, on the face of things, hold fair for Conduit too – the weighty doom-influenced riffage rarely gets above a trot, never mind a canter. This is a strength as well as a weakness, for the steady, determined pace anchors the anvil-heavy music to earth and lends it a weight and authority that is thrilling and somewhat addictive.

That’s not to say that there’s no variety here. The opener, ‘Temporal’, shows a marked development from their earlier EPs, possessed of the titanic riffs that typified that earlier material, but also a bigger hook and frontman and bassist Tam Ali’s most powerful and dramatic vocal to date. Statements of intent don’t come much bigger. In that sense, ‘Temporal’ sets the perfect tone for what follows: this is a band that does everything bigger and bolder. Awooga are aptly named, their muscular but highly melodic music the ultimate clarion call. ‘Temporal’ and the subsequent ‘Tabula Rasa’ are cut from very similar cloth – the latter perhaps more overtly doom-influenced. Elsewhere the band succeed in giving tracks a broader palette. ‘Waterhole’ possesses a somewhat lighter touch, tempered by a grungy bridge and chorus worthy of Alice In Chains, whilst ‘Blue Rose’ delights with a heat-haze of guitar that simmers in the background for the duration of the track. A perfect collision of shoegaze and doom, it’s surprisingly affecting. ‘Bandit’, on the other hand, opts for a completely different approach, its anthemic chorus interspersed with freak-outs from guitarist James Borrowdale and an atonal ending that is thrilling as it is unexpected.

There’s a definite sense that Awooga are a band whose music springs out of jamming, and nowhere is this more evident than in the 11-minute ‘Witness’. Spiralling effortlessly from a relaxed opening, the track climbs through the atmosphere and indulges in a delightful voyage into deep space before returning woozily to terra firma. It’s reminiscent of nothing more than Tool collaborating with Alice In Chains, albeit with a fuzzily psychedelic flavour. Drummer Taran Ali deserves a large part of the credit in making the track flow so well that the listener is entirely unaware of the gradual switching of gears throughout.

Just when the listener feels that they might have a handle on the record, Awooga throw a wonderful curveball in the shape of the closing ‘Otherside’, which largely eschews the churning riffs of the earlier tracks, substituting programmed percussion and a quieter, meditative tone – the effect is not unlike one of The Church’s late 90s records, accompanied by the kind of percussion work you’d expect to find on a latter-day Genesis record. That the band turn their hand so effectively to something with such a different tone is pleasing; more pleasing still is that the track itself is so effective; gently emotive, it makes for a wonderful closer. A musical palate cleanser of sorts, it also has the effect of making you want to play the album again as soon as it comes to an end.

The band’s previous EPs have been well received, and Conduit seems set to follow suit. When a band’s debut release has such a strong identity, there is perhaps a temptation to Xerox it over and over for subsequent releases, and the band deserve some credit for not being content to rest on their laurels, continuing to develop their sound, ensuring that Conduit is never guilty of that particular crime. The press release for Conduit is amusingly – and knowingly – sensationalist in tone, but on the form displayed here, only a fool would bet against them. Visceral, memorable and satisfyingly dense, Conduit is one of 2018s truly essential rock albums, a delight for riff lovers and prog fans alike.