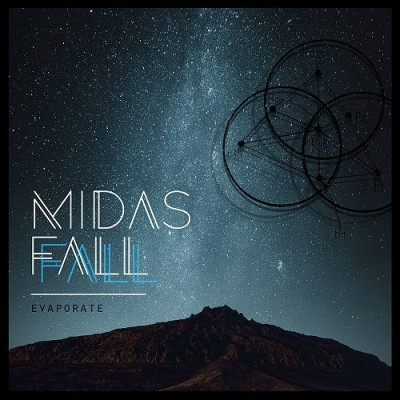 Scottish duo Midas Fall have been quietly making spectacular records since 2010’s Eleven. Return And Revert. Multi-instrumentalists Elizabeth Heaton and Rowan Burn blur traditional genre boundaries with their music, which is given an added frisson by Heaton’s spectacular vocals. The band sit somewhere in the centre of a Venn diagram that features post-rock, shoegaze, alternative rock and progressive rock, mixing and matching influences to produce genuinely inventive and exceptionally powerful material. They’ve gathered many devoted fans and met with richly deserved media attention along the way, but have yet to release a record that crosses them over to a much wider audience.

Evaporate could be – should be – the record that changes all that. The band have upped their game significantly for this, their fourth album. Opening tracks don’t come much more bewitching than ‘Bruise Pusher’, which sprinkles the band’s existing formula with a somewhat Celtic flourish and, perhaps more crucially, a more developed electronic element. The collision between the music-box keyboards, electronic percussion, pounding drums and Elizabeth Heaton’s soaring vocal is devastatingly powerful. It’s the sound of stars exploding, of galaxies colliding. Music you’re wary of playing too loudly in case the ground cracks open under your feet.

After such an opening salvo, it seems impossible that the band can maintain that intensity throughout, but incredibly they manage it. If anything, the subsequent title track is even more powerful. With its slow, gradual build, it comes across like Massive Attack’s ‘Angel’ at times, and almost Clannad-like at others, its abrasive electronic pulse dropping away mid-song to reveal a glacial ocean of calm with Heaton’s ethereal vocal drifting aurora-like through the air, before steadily building towards a stunning climax that will raise every hair on your head.

These opening tracks make perhaps the strongest initial impression, but the rest of the record is no less impressive. The steady, dizzying climb of ‘Glue’ is one of the most dramatic things the band have committed to record, whilst the sweet, graceful tranquillity of ‘In Sunny Landscapes’ is powerfully moving. Whether cleaving more to sturdy post-rock, as with the powerful closer ‘Howling At The Clouds’, or hushed atmospherics, as with the eerie ‘Soveraine’ and the quietly stunning ‘Awake’, Evaporate weaves a potent spell. For all the glories of the band’s back catalogue, Heaton’s vocals have never been so effective, or the music itself so dynamic and powerful. This is music to mark the passage of the stars; meditations on life and love designed to be heard under the lights of the Milky Way. The sound of isolation, of loneliness; but also of strength and resilience.

Midas Fall are one of the most powerfully emotive and original bands to emerge in recent years, and whilst their work has always been rich with imagery and willing to grow and metamorphose, Evaporate marks a new high water mark for the band. Quite simply, it is their best work to date: it feels more mature, and yet at the same time more adventurous, more ambitious. Emotionally draining, sonically dramatic, Evaporate is the sound of a band who have truly come of age.