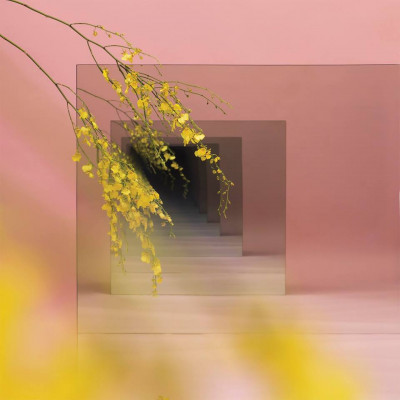 Witxes is the ambient/electronica vessel for French artist Maxime Vavasseur, and Orients is his third full-length record. It’s an album of soaring and ethereal ambient drone, heavy on the synth, but also incorporating “acoustic, hi-fi and lo-fi sources”. (Witxes is pronounced ‘Witches’, by the way)

Press releases and interviews with the artist reveal that the album took 2 years to make. He says that the theme and shape of previous records have emerged during the early stages of composing and making the music, but that with this new one it wasn’t so clear. He explains that “my mind was clouded, I was distracted by what I now see as meaningless things. I needed to re-focus on what matters to me but the music was struggling because I was struggling with my life in a way”. He is now re-focused, but that renewed state of mind is not reflected in the record. So the music on this album reflects a process of discovery, a journey from point A to point B via a route unknown to the artist before he started out, and for which the identity of point B was pretty shrouded in doubt, too. The journey but doesn’t reveal the eventual destination or conclusion for Vavasseur. This ambiguity and uncertainty is reflected in the meandering, wandering feeling that comes across in the drones as they drift and swirl. Perhaps it also shows in the track titles, such as ‘Distractions’, ‘Disruptions’ and ‘Interventions’.

The music itself is sprawling and mostly beatless. There are melodies buried deep in the ambient haze, but they aren’t the main focus. The first half of the album has a positive, open-minded vibe. It’s music that allows one’s mind to drift, to travel far and to contemplate. Formless music has this quality, and these compositions are very fine and superbly balanced in that respect.

Early on there are occasional moments of glitchiness, an edge, as appear fleetingly on ‘Rogues’, but these are understated. In the second half the moments of darkness become greater and longer, as on the harsh-sounding ‘Disruptions’ or with the booming distortions of ‘Interventions’. The changing thoughts and moods of the artist while he composed the music are evident. There’s definitely a feeling of not knowing where the music will go next – of “infinite possibilities” as Vavasseur puts it. The pulsing, almost tribal ‘Incarnations’ and closer ‘Clarivoyants’ are the closest the album gets to a beat, and here the character of the music changes. There’s less of the swirling ambience and a more directed, forthright sound. Is it light at the end of the tunnel? The album finishes in a much more upbeat way than it starts, with a recognisable freeform sax melody in the closing minutes that develops into a cascading squall. If Orients is a journey, Vavasseur went from aimless meandering through darker contemplation to reach a more positive, energetic and forward-looking conclusion. It would be interesting to see where the composer takes this latter vibe in the future.