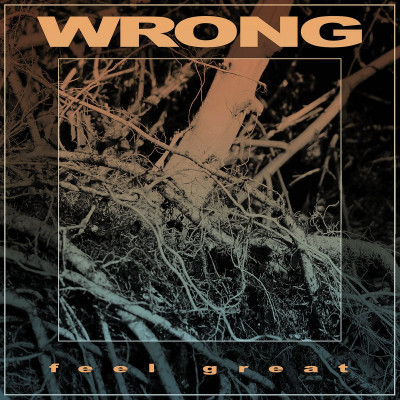 Wrong’s Feel Great is my favorite album year to date. Keep in mind that I still have Helmet’s Meantime on my iPod. Yea, you read that right. Helmet and iPod. And yea, things have changed and we’ve had lots of great music come and go, but a standard is a standard. Does Harley Davidson need to change? Well…yea, actually, they just did. And so too my fat clunky iPod needs to be updated. For my fancy new iPhone – Wrong’s Feel Great.

While the comparison to Helmet is not perfect, Wrong’s music is sufficiently similar in the qualities that made Helmet so ahead of its time that I think the analogy holds water. Both bands play a style of metal that is harsh, angular and meticulously precise. Their songs are short, succinct, eruptions of energy often noted by odd time signatures and barking staccato vocal delivery while at the same time maintaining some modicum of mass market radio sensibility and a surprising emotional punch. They are to music what new brutalism is to architecture. Grey and powerful, unrelenting, unrepentant. However, Wrong pushes further than Helmet, seemingly in every direction at once. Certainly, they more clearly embody the cynicism and bitterness of our time. Their music is more aggressive and emotionally resigned, lacking in any sense of the abstract or art rock. Thus, even though they sound a bit more like Helmet, they feel more like Pantera or Sick of it All.

The band, a quartet from Miami, Florida, rose from what was left of a hardcore punk band called Capsule, so the connection to the above-named bands makes sense. They also share influence from label mates Torche, who were also originally from Miami. The Torche connection is interesting because, while two bands don’t sound alike, they do share some technical elements. For instance, both bands sport a tight integration between rhythm guitar bass and drums, the effect being they all hit you at the same with the same notes. Torche does so in a fuzzy stonery, but loud, manner. Wrong does it with a sledge hammer to your face. Also, the guitar solos are less noodling cock comparos and more single-note stabs that develop above the song.

Back to the record and why I like it. First, it has no fat. It wastes not a second sucker punching you from the get go. You just stepped into a jail riot and a gang is lined up to kick the shit out of you. And, yes, I like that. ‘Errrordome’ is first up, and while not my favorite song on the record, it is a good example of the relentless punishment that is the band’s style. It starts like it ends, suddenly, violently. The vocals are harsh, almost atonal, and delivered in the bark of a drill sergeant.

Second, the album is very consistent without a bad song on it. While only 30 minutes, the band must have spent a ton of time editing and re-editing to finally distill the essence of what they wanted. Seriously, there is not a bad song on it. Picking a best or favorite is no easy task.

Third, it’s refreshing to hear hard/metal music that is intelligently constructed, harsh as hell, and yet still adheres to the basics of punk ethos of stripped down essentials rather than long drawn out opus’s that are now more common in metal music.

Summed up, not to get political here, for me the album is a reflection of our times. There is a lot of suffering going on in the US these days and there is something about the album that captures the essence of it, especially from the male perspective. On the surface the music is all toughness and aggression, but there is also a prominent undercurrent of emotion in the sense of disappointment and loss that is much more acute because of the context. It’s violence in tweets, but thoughtful.