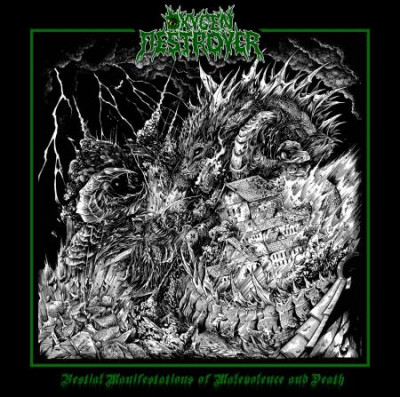 Bestial Manifestations of Malevolence and Death by Oxygen Destroyer

I don’t often delve into the Bestial Manifestations of Malevolence and Death, but when I do, it is for an inspiring new death/thrash band like Seattle’s Oxygen Destroyer. The band is named after the weapon that was used to kill Godzilla in an old Japanese film from 1954.

Much of band’s themes and songs are also Godzilla/Sci-Fi/Kaiju influenced. (I wonder how disappointed the band was that the band name Gojira was taken…) While the themes are heavily influenced from decades ago, the music is as current and sharp as any in the blackened thrash/death genre. Oxygen Destroyer’s sound reeks of the fastest 80s thrash strained through a 90s death metal colander, seasoned generously with the byproduct of nuclear kaiju (strange creature) ashes. Much like Godzilla, Oxygen Destroyer’s ominous sound breathes fire and sets their environment ablaze.

The tracks on Bestial Manifestations are short and snappy and come out firing. There is only the occasional atmospheric break with an eerie Sci-Fi sample. The songs are short, but the song titles are not. They are practically seeds for awesome short stories themselves, here are a few: ‘Vanquished by the Unrelenting Devastation of the Celestial Behemoth’, ‘Subsumed Within the Bowels of the Perennial Monstrosity’ or ‘Bio-Mechanically Imprisoning the Sacred Beast of the Apocalypse’. They are a mouthful, I think Lovecraft would be impressed. The lyrics are thought-provoking and articulate, with many pondering annihilation by nuclear weaponry. One example, from the track ‘Cleansing the Earth of Humanity’s Existence’ alludes to kaiju rage created by humankind: “Awakened by the ravages of the hydrogen bomb/ A God incarnate brimming with unspeakable hatred/ Thermonuclear energy coursing through his veins/ Transmogrified by the arrogance of humankind“. The words are as biting and vicious as Oxygen’s striking sonancy. Jordan Farrow’s vocals are reminiscent of Sodom and Kreator, with the occasional Thomas Gabriel Fischeresque death grunt, and they sit above the din, floating like a deadly post-apocalyptic nuclear cloud.

Musically the band is tight and show impressive creativity and agile musicianship, especially for a debut release. The album is an aggressive tempest of brutal metal, spinning wildly in a sinister sonic blender. The dank, dark tones of death metal loom track to track in the rhythm guitar parts (shared by Jordan Farrow and Joey Walker) and the grim tinged bass (by Ben Williams) which give Oxygen Destroyer a meaty, muscular, full sound. This combined with the merciless, full-throttled drum drubbing by Chris Craven make for consistently, punishing tracks. Craven is an absolute beast, a mega-thrashy kaiju of the highest order. That said, you better really like fast thrash beats, because it the primary driving force throughout the album. Bestial Manifestations doesn’t deviate far from Oxygens’ strong thrashing mad form – so if you like it, I expect you’ll like it a lot. Within the thrashing death madness, there are some serious Godzilla sized riffs accompanied by scorching lead solos that are shared by Farrow and Walker. Shockingly, a neck brace is not included with the download of the album.