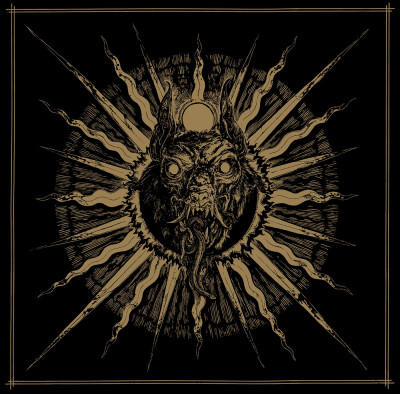 Revelations of the Red Sword by Svartidauði

Six track release from amongst Iceland’s finest black metallers. Before I read the press release I thought ‘huh, that looks a bit like a Ván Records album cover’, and sure enough, that’s where we’re located for this album, long awaited since the band’s first album in 2012. Clearly I hadn’t been paying that close attention, since there was previously a two track release from the venerable German label of acherontic audio art, but this certainly seems a good home for this innovative and aggressive black metal trio.

That cover image, some kind of demonic wild dog unleashed from a gold-on-black star design, certainly sets the stage for the opening of the record, where ‘Sol Ascending’ bursts into raw noise immediately… on my car stereo it felt like a horrifying wall of filth, almost like listening to three Dark Funeral songs all at once, though on headphones I can now hear the definition of the different parts, albeit still intricately and densely layered. I can’t really believe it when I check the press release to find just three members listed- it sounds like there’s far more workers than that toiling in the underground extreme metal mine to create this furiously complex racket.

The title of ‘Burning Worlds of Excrement’ is presumably inspired by the current state of contemporary political discourse, and certainly its pleasing to imagine our leaders having their heads thrust into this boiling thunder, hopefully to impart some sense to their nonsense. It’s hard to separate the tracks really though, as the effect of the record is just to revel in the fast, intricate density of the whole, and it seems that describing how each of the bits fit together vertically and temporally would take extended study. Geologically speaking this seems more igneous than sedimentary… the layers not so clearly separable like sandstone lines, but fused together like the flecked consistency of granite… there’s different identifiable bits, but they’re part of a heavy, incredibly dense whole, the forces under which it was forged and formed are scarcely imaginable.

In fact the final track, ‘Aureum Lux’, is distinctive in having some noticeably slower and more spacious sections, arpeggio guitars in slight syncopated rhythm, then later martial drums accompanying a sombre deceleration, each providing a brief respite from the submergence. But such moments are rare enough, and, in keeping with the apocalyptic tone, its reminiscent of the final scenes of the astonishingly pressurised submarine drama Das Boot, where (spoiler alert) the crew surface at port after a harrowing underwater journey, only to open the hatches and be met with a new kind of violent insanity exploding around them. Listeners to Revelations of the Red Sword will have a comparable experience of skull-beating intensity.