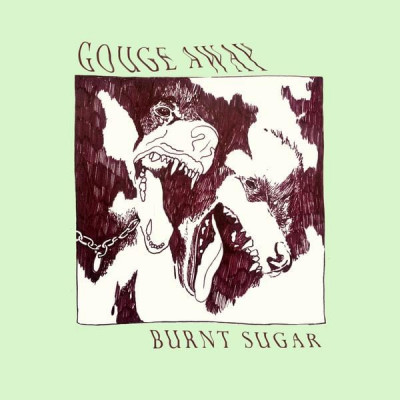 Burnt Sugar by Gouge Away

Two years on from their incendiary underground debut, the Florida post-hardcore quartet Gouge Away return with their sophomore album Burnt Sugar. Despite the relatively short gap between records much has changed since the group first emerged, April 2017 saw Gouge Away sign to Deathwish Records affiliate, Secret Voice, for the release of their 7″ single Swallow/Sweat, which vocalist Christine Michelle, née Stijy, credited with helping “find the personality of the band”. Following successful tours with Single Mothers and Touché Amoré, whose vocalist Jeremy Bolm helped to produce Burnt Sugar, the band stepped into the studio early in 2018 alongside the engineer Jack Shirley, best known for his work with the experimental black metal act, Deafhaven.

The results are in some ways quite a departure from the straight-up hardcore punk of Dies, as instead, Burnt Sugar appears at first to take its queues from the aberrant noise of bands like Pissed Jeans and The Jesus Lizard. The opening track, ‘Only Friend’ is a volatile flow of uneasy noise-rock discordance and fiery punk-rock energy, veering between poignancy and acrimony as Stijy sings, shouts and yells her way through intimate reflections on social anxiety. Following track, ‘Fed Up’, builds on the latent tension within ‘Only Friend’ with a cacophonous sub two-minute blast of direct fury. There’s more dynamism in store on ‘Slow Drown’, which juxtaposes a melancholic guitar line with yearning vocals before breaking into grooving baselines punctuated by eruptions of scathing hardcore.

It’s impressive how much nuance the group cram into the relatively short track times, as it’s not until the menacing, album highlight ‘Subtle Thrill’ that they surpass two minutes. However when longer tracks such as ‘Ghost’ emerge, the band prove themselves just as capable of using the additional time to showcase additional sides to their songwriting as slinking baselines and winding guitars set the scene for pained personal reflection as Stijy screams “If you can’t see now, then you never did, and you’ll never see me again”, putting herself in the role of song’s titular spectre.

The final track, ‘Raw Blood’ is perhaps the largest deviation from the groups earlier material moving between barely perceptible streams of consciousness spoken word, repetitive backing chants, hazy psychedelic guitar and experimental noise. It’s an intriguing if abstract bookend to the album revealing perhaps the bands continuing desire to reinvent themselves. With the relatively short album duration and revealing, heart-on-sleeve lyrics there’s an immediacy to Burnt Sugar which is incredibly appealing. Burnt Sugar is an album which is felt as much as heard, but it’s not an uncomfortable listen, instead, its direct nature comes across as a way of building the feeling of solidarity that comes with the bands hardcore roots and confronting melancholic feelings with a searing vitality.