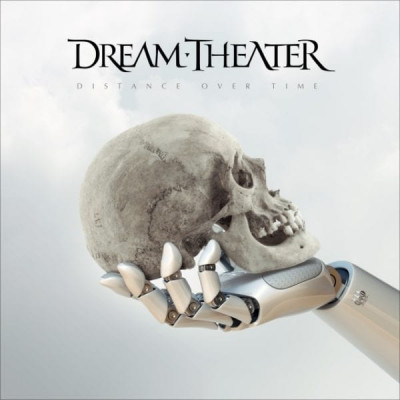 Distance Over Time by Dream Theater

It feels like US progressive metal legends Dream Theater have something to prove. The band’s previous record, 2016’s The Astonishing, was undeniably divisive. The album saw the band scaling back their renowned technicality in service to a deeply conceptual record that told a linear story – and whilst the album succeeded on its own terms, it was something quite different for the band. Atypical in mood and to some extent in style, it was always going to feel like an outlier in the band’s catalogue. It was also very much guitarist John Petrucci and keyboard player Jordan Rudess’s album, Petrucci having worked extensively on the concept, story and the general shape of the record for a year before bringing it to the band. Whilst Petrucci and Rudess have long been the band’s principal writers, The Astonishing was less collaborative than some of the band’s previous albums had been. Puzzled, confused or just plain unhappy listeners singled Petrucci out with undeserved accusations of control freakery, and those who didn’t take to the band’s grandiose vision and its lighter, somewhat less evidently technical or progressive feel were not slow to make their displeasure felt. It’s difficult to imagine that the band weren’t stung by some of the criticism after expending a great deal of time and energy on their 130-minute magnus opus. Shortly after completing their tour in support of The Astonishing, their decision to take their classic 1992 album Images And Words out on the road for a 25th anniversary tour felt like a move to reassure puzzled listeners as well as a celebration of the band’s commercial zenith.

As in the wake of drummer and founder member Mike Portnoy’s departure in 2010, the band regrouped, drawing in their horns and retreating from the furore, moving their writing and recording activities to Yonderbarn studio in the Catskills. Whilst the band had always constructed their albums via a process of jamming and subsequent refinement, they had taken to recording their parts individually; this time around, they treated the environment of the Yonderbarn as a retreat, all of the band members remaining on-site during the creative process, writing and recording as a unit. The recording of the album became a bonding experience for the band as well as the catalyst for what is one of the band’s most collaborative and organically created records for some time.

The band’s time spent touring the Images And Words material certainly seems to have had a substantial impact on the completed record. Like the early 90s classic, which is actually one of the band’s shortest albums at barely 57 minutes, Distance over Time clocks in at a comparatively restrained 56 minutes. Whilst the band’s legendarily dazzling technicality is still in evidence – witness the frantic time signature changes and nimble soloing that plays out closer ‘Pale Blue Dot’, the gnarly intricacy of ‘At Wit’s End’, or Rudess’s extended soloing that closes out ‘S 2 N’ – their tendency to use songs as launchpads for extravagant instrumental voyages of discovery has been reined in somewhat. There are still plenty of fireworks, but the extended excursions into the unknown are replaced with dense flurries of virtuosity that are more architectural than exploratory.

Another welcome element – something that has been a feature of the band’s work in the wake of Portnoy’s departure – is more regular use of acoustic instrumentation to provide greater dynamics. Whilst Distance Over Time is, generally speaking, a heavier and chunkier record than the band have delivered since 2003s Train Of Thought, many of the tracks find time for acoustic interludes, introductions or codas, adding an extra degree of drama when the band launch into a full-tilt assault. A key track in this respect is the dazzling ‘Fall Into The Light’, which gleefully shuffles moods and atmospheres like a deck of cards, offering blistering riffage and mellow oases of reflection before taking off like a rocket for a highly emotive finale. It’s a fine showcase for the incredible dynamics that are such a feature of this record.

That’s not to say that Dream Theater can’t pen a heads-down rocker with the best of them, though: ‘Paralyzed’ is a forest of dense riffing topped off with a skyscraping chorus, and the grinding, four-minute ‘Room 137’ is a welcome no-nonsense headbanger of the kind that the band have seldom penned since their 1990s heyday. For those who pick up one of the deluxe editions of the album, bonus track ‘Viper King’ is positively funky, built around a restless, rubbery riff that sounds quite unlike anything they’ve ever put on record before; even fourteen albums in, this band can still surprise.

Dream Theater’s eponymous twelfth album, released in 2013, was given its title because the band felt it was a perfect summation of the band’s sound and ethos. If anything, this is just as true of Distance Over Time; in fact, given the nature of the recording sessions, perhaps it has an even greater claim to represent the band’s true essence at this stage of their careers. Its more collaborative feel, its streamlined songwriting, its carefully honed running time and its ballsy, modern sound are all indicative of a band that has now fully rediscovered its soul, its confidence and a new way of working following Portnoy’s departure. As with all of the band’s best work, the album successfully straddles the worlds of metal and progressive rock, drawing inspiration from them both without sacrificing the strengths of either. Whilst it was always clear that The Astonishing was bound to disappoint some listeners, Distance Over Time is, self-evidently, the band’s best record for some time.