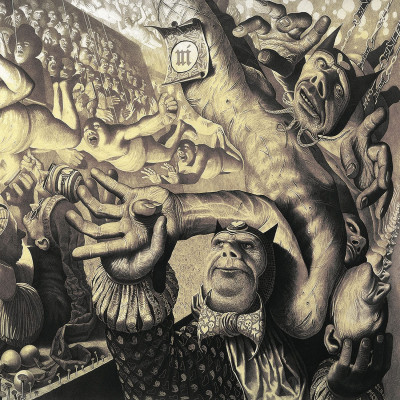 Ni have returned with their first album proper since 2015’s Les Insurges de Romily and sees something of a brutal return to form after last year’s collaboration with fellow French band Poil (together as PinioL) on the under appreciated Bran Coucou.

I’m not a Millennial – fuck you very much – Lord, I’m hardly even a proper reviewer, if I can use the term, but unless you really hate music of any kind – say you’re a Tool fan – you might well have missed this gem of a band in previous years. Then again, it’s only pretentious, arsey reviewers like myself who end up in these musical cul-de-sacs, eschewing more popular acts, desperate to look cool and relevant – and craving validation – that find these bands in the first place.

Poil and Ni have followed a parallel trajectory over the past 10-years, Bran Coucou was the inevitable terminus of these like-minded artists and was, one of the more exciting math-rock releases of last year. It’s on Bandcamp so you’ve no excuse if you haven’t heard it. Of course, this leads to the question of where next? Both have records out in their own right in 2019, Ni happened to fling themselves across the finish line first.

If you care at all—about music, about anything—then you need to brush up on these bands. Indeed, I don’t know which pasty-faced stooge books the acts for ATC but a Poil/Ni/PinioL, set would fit right in with a festival which now appears to lean towards the heavy end of math-rock, and hopefully have the unwashed masses spitting out their parsnip smoothies with appreciation.

So, Pantophobie: a fear of everything. See, I know my French (i.e. knows how to use Google Translate). Do we fear everything in 2019? I fear being irrelevant, I fear not being validated for my views – look – look! – it’s mentioned in the third paragraph, stoopid! I fear being overtaken by people younger and cooler than myself (if I was ever cool. I certainly was young which has its own painful memories), and my worst offence of all is making this whole review about me, because I fear not being able to express how I feel about this record and band.

“You have,” said Franklin D Roosevelt, “nothing to fear but fear itself.” Well, thanks a bunch, Franklin. To be fair, he had to deal with the Wall Street Crash and the Great Depression. I just have to manage my own. But FDR lived in uncertain times that called on bold leaders to take bold action. We inhabit such times ourselves (but without the leaders). We fear Trump and his toddler tantrum destruction of the United States, we fear Brexit and the future of Europe. Yes, I fucking mentioned Brexit in a record review – so this isn’t The Economist – but my point is we live in times of total fear, and if it’s not big events that we fear then we fear for ourselves, our jobs, careers, loved ones. We absorb fear. We burn out with fear. The fear of fear has taken over. Fear defines us.

In nine tracks Ni take a sledgehammer to smash open the fears of the age, starting with mundane, humorous, bathetic fears: the sun, chickens, vegetables; before taking on fears that sound all too familiar for the burnt out Twenty-First Century generation: writer’s block (our fear of choice here at E&D), fear of ridicule, being forgotten, fear of failure; finally, Ni hit on the fears that truly reflect the paranoid fears of our age: fear of speaking, standing, or walking – and then the record finishes, quite literally fearing itself to a standstill. Yes, hide under your duvet all day because you have nothing worth doing and everything to fear. Yes, it’s funny laughing about fears of chickens and vegetables. Who’d have those, eh? Losers! Unless of course you do have a phobia of such things and what is ‘normal life’ for most becomes something very tricky indeed. Fear of ridicule? Fear of failure? You’re not laughing now are you. Ni very cleverly undercut the humour, moving from that which we might mock insensitively, to anxieties that become very personal, and which are for many people debilitating prisons from which there is seemingly no escape, the screams in the song become screams of frustration and rage – our own rage externalised. Edvard Munch had that right didn’t he? Right.

I’m going to go back to that sledgehammer now because reviews must have metaphors and if I can shoehorn in an awkward one then that’s all the better. Imagine if you will a building site (if you work on a building site this will be easy for you), and imagine that a sledgehammer is falling towards you from the top of some scaffolding in slow motion – so it is with ‘Heliophobie’, which opens this recording. Bit by bit it heads towards you, with creeping dread and certainty, and then all of a sudden – bang! – the contents of your delicate bone protected brain are now the external decoration for the errant sledgehammer. Was it dropped deliberately? Did the carelessness of a worker unfamiliar with current health and safety as it applies to building sites cause it to fall? Such knowledge is useless to you because you’ve been pounded into submission. And such is the case on this record as each of the tracks that follow provide a merciless, brutal pulverisation, with very little light and shade in between. Unless, of course, you take each of these component parts and take the album as a whole. It’s a less virtuoso and experimental affair than the chimera that was Bran Coucou but it offers some big, chunky, sledgehammer, riffs. Crowd pleasing if you will. That crowd being those of us cool enough to listen to this band in the first place.

Credit though to Anthony Beard, Nicolas Bernollin, Benoit Lecomte, and Francois Mignot, who perform some virtuoso twists and turns throughout the record, more so than any guitars, bass, drum set up has any right to do. It’s a thrilling trip, but perhaps for me Les Insurges de Romilly and Bran Coucou showed more invention. Every band however deserves to make at least one really heavy album, and this is theirs. Merci.