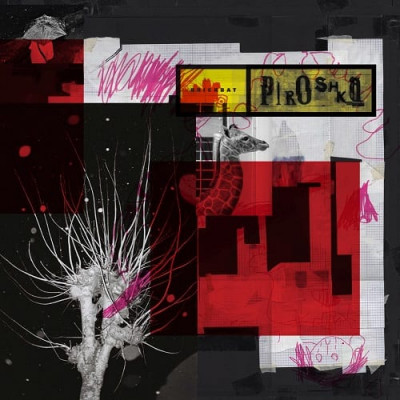 The hearts and hopes of Lush devotees – this writer amongst them – were raised when the legendary 90s band reformed in 2015. Sadly, their return was brief, although it spawned a superb farewell present in the shape of the Blind Spot EP and an already-legendary round of live shows. For vocalist/guitarist Miki Berenyi, who, along with bandmate Emma Anderson, had for so long been the focus of the band, it was a long-awaited return. After the death of Lush drummer Chris Acland, Berenyi had retreated from music altogether, spending over a decade away from the spotlight.

If anyone – even Berenyi herself – imagined that she would be content leaving music behind again as Lush left the stage once again, they were, thankfully, to be disappointed. Acland’s place behind the drum kit for Lush’s resurrection was taken by ex-Elastica drummer Justin Welch, and it was Welch’s enthusiasm that was to inspire Berenyi to consider forming a new band. Berenyi’s partner, ex-Moose guitarist KJ MacKillop, and Modern English bassist Mick Conroy completed the new band, named Piroshka after the Russian variant of the legend of Little Red Riding Hood – the name a reminder that all is not as it might appear.

Brickbat is Piroshka’s debut album, and it is immediately clear that it – and the band – mean business. “Brickbat” is another term for a missile, and this record is most definitely not a showcase for the shimmering shoegaze that Lush became famous for. ‘This Must Be Bedlam’ opens the album with a squall of feedback, and it’s quickly apparent that anyone expecting Piroshka to pick up where Lush left off is in for a rude awakening. The song’s mid-paced shuffle is deceptive: it feels loose, and simply constructed, but there is a huge amount going on. It is immediately very different in feel to any of the band members’ previous bands – Berenyi drops the F-bomb when you’re barely two minutes in, and you can clearly hear laughter as the song abruptly ends; this is the sound of a band having fun and enjoying the process of forging their own path.

This grittier, more earthbound feel is found throughout the record. ‘Hated By The Powers That Be’ sets out as a chiming pop nugget, but the fuzzed-up guitars lend it a Clash-like swagger, and an extended outro opts to throw out the rulebook altogether, thundering into the distance until it has left the rest of the song far behind it. ‘Run For Your Life’ is similarly possessed of a feverish punk energy, big chords and powerful drumming underpinning Berenyi’s bubblegum vocal. Brickbat is also more concerned with the world at large than the more celestial, internal world that Lush inhabited. ‘What’s Next?’, an up-and-at-’em rocker bemoaning the disunity undermining the modern world, pulls off the difficult task of tackling political topics without coming across as lecturing or hectoring, Berenyi expressing her disbelief, anger and disappointment at the chaos that passes for Western politics today.

The repeated use of electronica is another thing that marks Piroshka apart from their illustrious forebears. The enjoyably snarky ‘Never Enough’ sounds like a refugee from Lush’s Lovelife, an enormous hook-laden chorus fitted with Doc Martens courtesy of the rhythm section, and yet it’s filled with flurries of electronica, chaotic feedback and guitar effects freakery that means it never feels imitative of Berenyi’s previous band. This is truly a melding of musical worlds, creating something new and vital, yet with elements of familiarity.

Berenyi’s honeyed tones are often laced with grit on Brickbat, but sometimes there is more than a slight echo of Lush, as one might reasonably expect with Berenyi’s voice and guitar up front. The swooping harmonies and chiming guitars of ‘Village Of The Damned’ – a song about wall-to-wall media coverage of school shootings – are heart-warmingly familiar, assisted by a shimmering electronic undertow, brass fanfares and a closing mournful trumpet, whilst ‘Blameless’, built around mournful 60s pop guitar, swooning strings and Berenyi’s atmospheric vocal, is a particular highlight. ‘Heartbeats’ is more unusual, it’s washes of cymbal and Berenyi’s almost choral vocal expressing the anxieties and concerns of a parent dismayed at the problems awaiting their growing child. ‘Everlastingly Yours’, with its tinkling percussion, gliding string arrangement and interjections from a brass section, also contains faint echoes of the past, re-tooled in devastatingly bittersweet style. Even here, though, there is a current of unease, as Berenyi sings about ripping out someone’s heart, wanting to “shatter his bones with a smile“.

Closing track ‘She’s Unreal’ may open with squiggly electronics and drums straight out of the John Bonham school, but when those glacial walls of guitar kick in, many listeners will be nursing goosebumps the size of goose-eggs: the effect will be instantly familiar to anyone who worked their way through the 4AD back catalogue in the 80s and 90s. Yet this is no mere homage, as the chunky bass work and the almost oppressive, darker feel of the song take the song in an entirely different direction than might initially seem to be the case.

Piroshka contains three musicians in the band that took the stage at what looks increasingly likely to be Lush’s final gig, so it is perhaps not a surprise to hear so much of Lush’s musical DNA within Brickbat. This is not a case of Lush-by-any-other-name, however; Piroshka take things in a different direction thanks to McKillop’s forthright style, and the rhythm section lends a tougher, edgier feel to the band’s music – Welch’s drumming is formidable throughout; this is surely his best recorded work. Some may lazily categorise Piroshka as Lush V2.0, but there’s a lot more on offer here for those who can look beyond the immediate similarities. This is not a band content to fall gently into the shadow of their forebears; this is an evolution, a modern, gritty, variant with a new outlook. Vital, memorable and surprisingly powerful, this brickbat is a tremendous opening salvo from a band that promise a great deal.