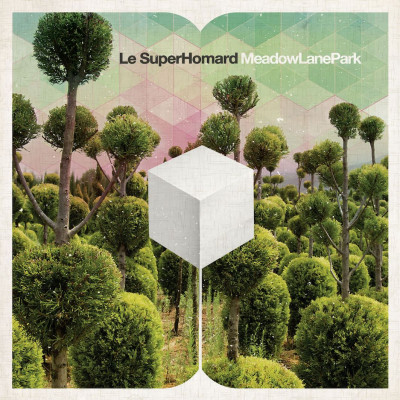 Drawing on influences such as Air, St. Etienne, Broadcast, and Stereolab with the 1960s panache of Burt Bacharach, Serge Gainsbourg, and Nancy Sinatra, Le SuperHomard cast wonderous and mesmerising incantations all over their latest long-player which – if one is allowed to wax lyrical -conjures up road trips along the Côte d’Azur, in an open top sports car with a beautiful companion at your side.

MeadowParkLane is the second LP proper from the Rochefort-du-Gard band, signed to Spain’s Elefant Records. If you’re at all into any or all of the artists listed above, you’ll probably know what to expect: sophisticated, upbeat, glamorous pop, quality arrangements, gorgeous singing, wistful dreamy mellotron guided melodies. I loved it from the first listen, and – in all honesty – am yet to tire of it. It’s hard to evoke the French Riviera sitting on a bus in Swindon in February in the rain, yet such is the transformational quality of Le SuperHomard’s music, you can almost imagine yourself there.

Pop, of course, is a very polarising term. I couldn’t, for example, tell you what’s Number One in the pop charts at this very minute. I can tell you that it’s probably Artist A and Artist B (Feat. Artist C), and it’ll sound the same as Number Two in the pop charts, and Number Three and so on. “A-ha!” you’ll say, “A-ha! But you’re a middle-aged, middle-class, beardy white guy – who are you to tell the kids what to like!”, and to be fair you’d probably be right. The last thing The Kids need is another middle-aged, middle-class, beardy white guy telling them what to listen to. But pop isn’t just for the kids. If you switch on BBC Four in the UK, you’re bound to encounter 1980s pop at both its best and at its very worst. Pop is big business. Pop is everywhere. Many of us (Echoes and Dust readers excepted) rarely move on from the music of our youth – it brings us comfort, something safe, something familiar. But bands like Le SuperHomard, and Lord knows we need more of ‘em, draw on the classic pop tropes of yesteryear, but bring everything bang up to date with original songs, crisp production, and a swirling sense of psychedelic experimentation. MeadowLanePark may seem like a mindless meander through a leafy garden, but it’s all very carefully planned, tipping a hat to the past, but bringing us something that is fresh and irresistible – like a plate of scallops.

Don’t like scallops? Well I can’t help that. I don’t like most pop. But if Pop should be anything it should be this experimental, and if you listen to those soaring string sections, that deep throbbing bass, and clear as crystal vocal arrangements you’ll understand exactly what is missing from the homogenized hit parade of 2019. MeadowLanePark is grown up, satisfying, and glorious.