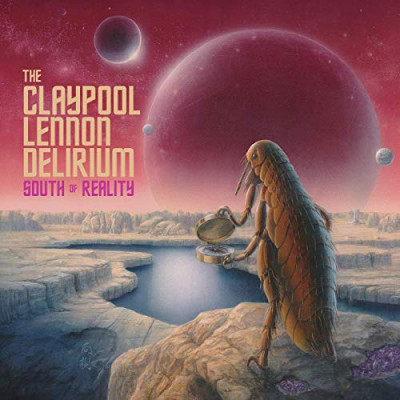 South of Reality by The Claypool Lennon Delirium

For music lovers, the album format is still relevant, especially to those who love the private gateways they can provide for whole-heartedly immersing oneself into the artists creative zone. The eye-brows raising collaboration between Primus bassist/vocalist extraordinaire Les Claypool and Sean Lennon indeed allow such immersion, as The Claypool Lennon Delirium 2016 debut Monolith Phobos delighted and challenged in equal measure. For sophomore album South of Reality, they still deliver a chock-full of ideas, but a smoothing over in the production values, coincides with the pair sharpening up their focus for a considerably more palatable and fuller enjoyable listening experience.

South of Reality is self-produced by the duo and mixed by Les Claypool at his own Rancho Relaxo studio in Sonoma County, California. It is still a swirling mix of acid fried Sargent Peppers era Beatles psychedelia, check ‘Blood and Rockets (movement l – the saga of Jack Parsons – movement ll too the…)’ as lysergic melodies reach aural highs as it sound-tracks the tale of rocket scientist Jack Parsons. The storytelling continues in ‘Boriska’ (the boy who claimed he was originally born on Mars) as the song sweeps and swoons in huge Beatles vocal harmonies fashion.

Elsewhere, the generous amount of playfulness never dims, as they incorporate Les Claypool’s own distorted prog, funk psych of Primus on ‘Toady man’s hour’. kevin Ayers style nursery rhyme melodies can be heard on ‘Little fishes’. Throw in 1970’s Rush solo innovations, Dark side of the Moon Pink Floyd textures, especially the latter on the excellent ‘Amethyst realm’. Even the 1960’s Batman t.v. series theme gets a homage in the latter stages of the title track. It all amounts to an enjoyable diverse array of influences which remarkably combines for a strong, cohesive album.

And enjoy is the key word, for best results, just to go with the flow. If there is one constant thread throughout then it’s Lets’ rumbling basslines, which takes this reviewer back to first seeing Primus support Janes Addiction on tour, and was inevitably sucked into their oddball soundscapes by his mesmerising fretless bass playing. And it has the same effect here.

South of Reality is a delightfully surreal musical trip by two very talented gentlemen. And in these pinch me, is it really happening troubled times, we need the stylistically warped, lysergic, inventively earworm sounds of Claypool Lennon Delirium more the ever. Their sophomore album bags, the pleasingly consistent album so far, award.