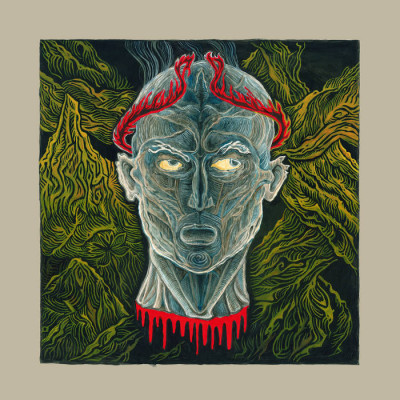 L’Acephale return with a multifaceted, large-scale and intriguing set that traverses the range of black metal styles, caverns and sub-crypts.

The opener ‘Sovereignty’ is a great soaring blast, which lapses into acoustic double-strums while tendrils of feedback still drift and creep around. This is the basis for a German(?) vocal, a little like David Tibet’s declamatory nursery-rhyme style but a bit more stentorian. Abruptly a trapdoor pits us into more familiar black metal zone of an undulating riff and furious yelling, fittingly the most prominently audible word shrieked is “chaos”. Undulating is a word that fits again in ‘Runenberg’, with a lot of the riffs here displaying a sort of uneven wavelike quality, or as if beholden to a secret template that strictly governs their design, through various modulations and configurations.

For me as a complete Menace Ruine fanatic, I was delighted to see the Montreal blackened folknoise band’s Genevieve Beaulieu listed as contributing. She sings on second track ‘Gloria In Excelesis Mihi’ (as well as, I think, the windswept, cauldron-glare incantation at the very beginning of the record). Her vocals this time are in French, so not knowing that language I can’t hear if she’s using that weird syllable-stretching intonation that lends an air of strange alchemy to Menace Ruine performances. But the staggered use of two recordings to produce a dizzying self-duet is familiar, and there’s a similar sense of twilight chanting over olde fairground drones. Here it’s a bit gentler, acoustical pick-and-strums with a swirshing feedback churn low in the back, and the piercing grain of G’s voice is just fantastic.

Next, ‘Hark! the Battle Cry is Ringing’, as already suggested by the title, is a bit of mock war-like Viking chant or whatever, which as an overall style I’m not keen on, but its well enough done… I suppose there’s contrasting incarnations of what might be considered neo-folk on this track: first this stuff, which is a bit fake-archaic with acoustic instruments and a multiple stern voices intoning something very brave and important-sounding; then later, the sort of slow dirge feedback-textured moaning droning strangeness (which I much prefer, if my confessed Menace Ruine obsession didn’t give you a clue). The contrast between trying to evoke an ‘authentic’ past that’s gone, or trying to connect with a tradition through contemporary tools I suppose. Of course there are ideas and lyric texts about, by, or related to Georges Batailles, Friedrich Nietzsche and so on, though the relevance of these to the listening experience may be best left to the individual and their own delvings.

Then ‘Winternacht’ is a rotting blast, a wall of filth right out of an okkvlt photocopy demo tape which then metamorphoses into an atmospheric goblin-in-a-swamp-dungeon passage of slower and quieter strumming while stinking  globs of pitch glooped around. Later on in the track the prison warder comes around to give us a lecture in German and then we’re into maybe my favourite track. This one, ‘Sleep’ touches the sludging deathdoom base, a foreboding sluggish chug at first with some fiddlings of feedback.. the extreme metal audio equivalent of sharpening the knives. A shrieking frenetic burst and then back to the chug, with added ominous murmuring about sleeeee eee eeep. The last track could practically be an EP on its own, nearly 20 minutes covering yet more of the varieties of black metal experience from violin-like horrorscreech intro to solid confident monster-riff to judder’n’yelling to folkorical interlude to epical twin guitars descending to coasting rattling rumble to final raging torrent to ultimately evaporating in droning green wisps.

The record is a sprawling multifaceted thing that gets better each listen, with mumbling incantations and screeches in at least three languages, and a wide range of elements and experiments from across the cutting knife edge of black metal. You’ll be wandering around in search of your own head by the end of it.