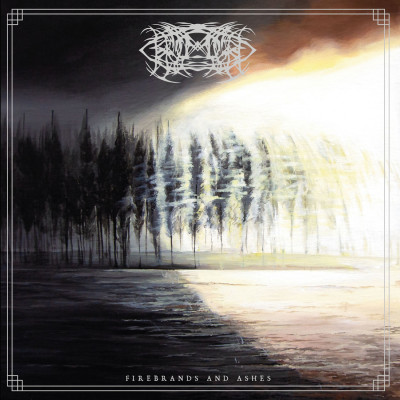 Firebrands and Ashes by Crom Dubh

Some bands you’re excited to hear what experimental territories they explore next, some bands you’ve registered a promising debut and want to hear the development, maturation even. But a rare category is the band who appear on a record totally integrating with a cutting edge of a genre around them but sounding just completely distinctive, having nailed their chosen niche, however particular or obscure. In that case you just wait for another instalment of the stinging originality of vision and see where it takes you.

I thought Crom Dubh‘s first album was brilliant as soon as I heard it. like I’d heard a thousand black metal demos and albums and EPs described as having folk elements, and while folk metal is something I can understand in theory, in practice to me its almost always impossibly cheesy, the oi-oii-oiiii choruses and Viking jigs (?) don’t do it for me. Ugh. But 2014s Heimweh was the first obscure gem that actually sounded like what I imagined folk and metal influences could produce… raw and raging yet atmospheric black metal that had woven into it certain scales or modes or harmonic patterns. Distant echoes of a folk music in it, not pushed up front like a dumb gimmick but deeply ingrained into the music, a moss-covered stone ruin which at heart was founded in black metal not stereotyped regionalisms.

And so happily the band’s second full-length has been worth the wait. A sharp avalanche begins the record, a churning black metal riff drone enlivened with martial drum snaps and then an atmospheric blur that’s total occult black metal and weird aurora smear. It’s a sub-2-minute opener, but one that’s actually got riffs and feeling rather than the customary inconsequential dungeon clanking or wispy synth on some album intros. The title track then announces itself with the snap of a martial drum calling the already-fuming guitar lines to it and an immediate entry of the vocals, strictly within black metal tenor but ranging from hollow growl to wild screech within a short stylistic distance. The strict discipline of the drums is a theme throughout the record, solid but in control of several registers, such as towards the end of ‘Last Dust’ where dashes of cymbal keep in touch with the screaming guitars while underpinning it all with daggering blastbeats. And those screeching guitar lines themselves are only ripped out sparingly, adding to their impact and to the overall sense of powerful gripping control amid furious chaos.

The forest of black metal riffs is tightly closed in around the paths, but there’s sometimes glimpses of sky when the tremolo guitars burst sailing out before their swift realignment into crunching ensemble heaviness. ‘Ram in a Thicket’ feels like a standout for its scope, perhaps just because as the longest track it has a complex development and varying pace, as well as just allowing sections to extend and keep on raining down the stomping monster riff. Later, ‘Burning’ shows some of the most expressive guitar work that’s still always at the service of gripping track development, and on ‘Astride the Grave’ the band show they can maintain the misty archaic atmosphere at high speed. The album closer is another long exploration, with perhaps the clearest view of the ancient architecture at the roots of the band’s approach- some of the guitar lines could almost blend into a melody and echoing effect you might hear from pipers on hillsides, giving the piece an elegiac feel.

A band who don’t court distractions through shock or dressing up or novelty sounds, but seem to have simply worked for several years to craft a serious and deeply committed manifestation of black metal. Will be listening to this, and finding new aspects of its densely packed creativity, for many years to come.