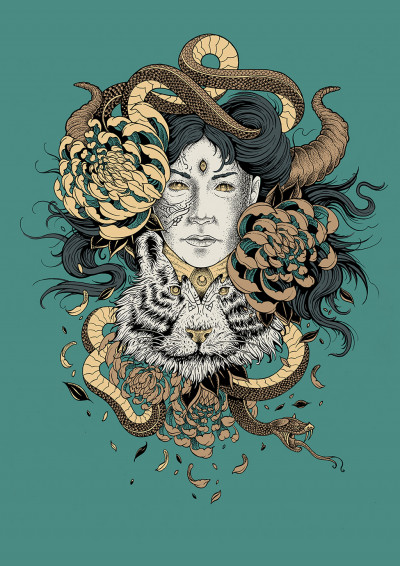 ITHACA are making some of the most brutal, beautiful and emotionally charged hardcore around right now. Their latest album, The Language of Injury, is in my top five of records released this year and their live show is as intense as it gets.

There were a good few years where I thought I never wanted to listen to hardcore again. I was absolutely burnt out on the machismo and misogyny that can come with the genre. Ithaca, along with bands like Employed To Serve, give me hope for the genre.

Inclusive, vital, expansive and explosive – everything you could (should) want from heavy music.

Cultdreams play huge, woozy, punk and shoegaze infused grunge.Their songs cover themes of grief and loss, the pressure of expectation to conform to society and the current state of politics in the UK. Combining the personal with the political and showing that they’re two sides of the same coin.

“Just don’t worry, keep on going, everything is fine,” goes the chorus of recent single ‘We Never Rest’, and as uplifting and anthemic as it is, in the context of the song title it manages to sound both hopeful and exhausted all at once. Which is pretty fitting for the way the world is right now.

Cultdreams’ new album – Things That Hurt – is out on August 16 and is my most anticipated release of the year.

I’ve missed a lot of opportunities to catch Danish blackgaze act Mol live. I’m not about to do it again. And you shouldn’t either.

I’m an absolute sucker for the combination of black metal and shoegaze atmospherics; in fact, anything that takes black metal as its template and pushes at its perceived boundaries is alright by me.

Mol received glowing reviews for their crushing Holy Roar released debut JORD, and I’m pretty damn excited to see how they blend the darkness and light of that record in a live setting.

Daughters will be familiar to most people by now, after their latest album, You Won’t Get What You Want, broke both their eight-year hiatus and everyone’s expectations.

However, if you’re yet to catch their live show then they are a must-see at ArcTanGent.

Between each band member copious amounts of sweat, blood and saliva are put into each performance, in service of some of the most dark, abrasive and exhilarating music around right now.

I must admit that I haven’t kept up to date with Coheed and Cambria at all.

Somewhere in my mid-twenties I decided that their blend of emo, progressive hardcore, metal and science fiction were not for me. I was definitely taking Midlake very seriously around that time though, so. . . But, just listen to the huge melodic hooks of ‘A Favor House Atlantic’ and the gargantuan riffs powering ‘Welcome Home’. This is going to be a triumphant and rousing end to the first day of the festival and I will be screaming along down the front.

Maybe I should make a banner apologising for sending their CDs off to Music Magpie for 50p each…?

I can’t deny it – I slept on Brutus until very recently. I have a really unfortunate personality trait whereby if someone really really, really wants me to listen to something, there’s a part of my brain that will make me put off checking it out for as long as possible.

I knew the excitement that their album Nest was eliciting. I’d heard about their intense live show. But that annoying part of me that I really need to override just delayed and delayed and delayed. . . Until about a week ago, when for whatever reason, I came to Brutus in my own time.

Holy hell! I wanted to grab all my friends and scream, “Why didn’t you TELL me?!” But of course, they did. I’m just an idiot.

The Belgian trio’s combination of powerful, emotional, heart wrenching vocals, gut-churning guitars and haunting atmospherics is sure to be an ArcTanGent highlight.

Another band I’ve missed for various ridiculous reasons every time they’ve played near me and I’m beyond stoked that I get to finally catch them at ArcTanGent. Birds In Row are Deathwish-rostered three-piece experimental hardcore, in the vein of tour mates Converge, but often with a more jangly, paranoid edge.

Talking to Loudersound about their latest album We Already Lost The World they said:

“It’s a good time to tell people that you don’t need to love everyone, but you can respect everyone and work together to try to build something because we can’t count on anyone above us,” say the band. “We can only rely on people around us – neighbours, friends, people you’re involved with on a daily basis – they’re the people you should do things with; try to work with people and don’t hate them without knowing them.”

And that’s something I think we can all get behind.

I’d heard of Slow Crush – I follow Holy Roar intently because have they actually put out anything below incredible recently? – but hadn’t had a chance to listen. So, I took putting this piece together as an opportunity.

I wasn’t disappointed AT ALL.

You can get a sense of what you’re in for from the name – a hazy, melancholic, yet overwhelming tidal-wave of guitars, martial drumming, and washing cymbals and yearning vocals. Like being buried alive under the euphoric weight of your own emotions.

AA Williams is a relative newcomer, yet has been spreading her name quickly thanks to an absolutely astounding EP – Control (on Holy Roar once again) – a series of high profile support slots with the likes of Amenra, and a slot at this year’s Roadburn festival.

This is heavy music that leans on the weight of emotions and atmospherics, rather than distortion pedals and gargantuan riffs. There are easy references to be made to similar artists, which you can find in most articles about Williams, but what I hear most of when listening to the likes of ‘Cold’ and the EP’s title track is the slow patience and cyclical melodies of Earth.

It’s in the payoff that each song promises but doesn’t always deliver: the thick, dust-coated atmosphere that the music conjures, the pristine tone of the guitar, and the timbre of Williams’ dolorous voice often seems to be the entire point.

I’m gonna hold my hands up and admit to not having actively listened to Battles since Mirrored, but boy did I listen to that record.

It sounded like very little that had come before it to my ears at the time, and in catching up for this piece I can tell that very little changed in that respect, up to their 2015 album La Di Da Di. I did catch them at Pitchfork Paris a few years back; however, it had been a long day, and while I don’t remember specifics about their set, I know that I danced and shimmied the whole way through.

Watching John Stanier, one of my favourite drummers of all time, is always an absolute joy; and seeing the band build their melodic, loop-heavy, experimental music right in front of you is mind blowing and utterly baffling in equal measures.

The perfect band to get hips swaying and smiles spreading at the end of Friday night.