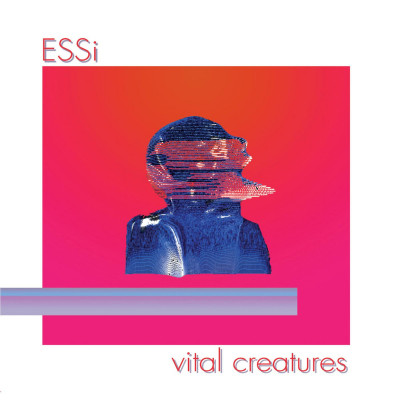 Vital Creatures bubbles, creaks, scrapes, skronks, and bursts. On their Facebook page, ESSi (Jessica Ackerley on vocals and guitar and Rick Daniel on drums and electronics) describe themselves as “hyperactive syrup; twinkling synthetic rage; atonal howling; ragged celestial dissonance,” and these are all apt descriptors to which I might add ‘menacing melodic provocation.’ The music and the experience of listening to Vital Creatures seems to waver in and out of sync, where bearings get lost and the touchstones of improvisation, ambience, and noise are confounded.

The New York City duo of guitar and drums have made a fantastic sounding album where the instruments maintain a kind of basic coherence but are often smudged and blurred beyond expectation. The tracks on Vital Creatures, for example, ‘Pads,’ move from discordantly melodic vocals and guitars to ambient textures and back to jagged asymmetrical riffs and rhythms. The vocals are terse and tense, floating over the noise and feeling oddly detached at times from the noise happening below.

Album opener ‘Marimba’ takes what could almost be an African High Life guitar part before moving into much more punkish rock pounding territory. This is illustrative of the way this album unfolds—when you think you’ve got a handle on the noise to come, Ackerley and Daniel deftly shift into unexpected territory. The guitar playing throughout is funky, atonal, and scrappy while Daniel’s inventive drumming breaks time and distorts the surfaces the two create.

I keep thinking here of No Wave bands at their noisiest, like very early Sonic Youth, Harry Pussy, or Glenn Branca but with more hiss and fuzz—more ambient post-punk. The track ‘Seams’ opens with a noisy guitar burst before moving into a mutated pop song if it weren’t for the odd squeaks and the one minute of echo and drone that wouldn’t be out of place in any ambient repertoire, before returning for a riotous noise exercise for the final 30 seconds. Short interludes like ’13-13-13′ burns slow with what sounds like ramping synthesizers. The production throughout is high quality and Jonathan Schenke at Thump Studios should be commended for his work.

The real surprises here are the combination of fantastic production throughout and Ackerly’s singing which becomes like a whole other instrument adding to the raucous flux. ‘Da Di Da Di’ shows Ackerley’s vocal range (along with second vocalist Paige Johnson Brown) expanding out into a strange kind of alien folk music. Elsewhere, like in ‘Break Frame’, Ackerley sounds detached among the quasi funk of her guitar, intoning and intonating almost bored, almost done, most certainly tired—maybe.

And this is where the menace seems to creep in. The sounds, the jagged timbres, the feedback, the vocals, the artwork, the video for ‘Fly By,’ even the title Vital Creatures all seem to point towards the dissolution of norms and expectations and the core certainties that seem to be crumbling all around us in the 21st century. Just when you think you’ve got it, the ground shifts under your feet and you’re on to something else. Just when you think you’ve figured it out, perspectives change. Maybe it was always like this. It’s oddities like this that make the album sound so good. The playing is great, as is to be expected from two upcoming musicians from NYC’s improvisational scene, but the real joy of this record lies in Ackerley and Daniel’s fearless playing with tone, texture, and form.