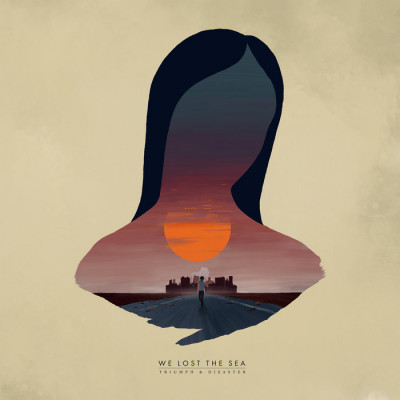 Triumph & Disaster by We Lost The Sea

“We rose with the sun and fell into disgrace.
We bled the earth dry while guilt soaked through our veins.
Are we really too late?”
‘Mother’s Hymn’

These are the final (and only) words of the new We Lost The Sea album. And that short refrain sums it up perfectly. Not just the album or the music, but the state of the world, society and so many other things as a whole currently. The prevailing feeling of ‘heading to hell in a hand basket’ seems to permeate more and more of daily life, with sometimes little to hang onto to help guide us in the right direction… Yet somehow this release does exactly that while dealing with the end of all things.

It’s strange to describe something as ‘triumphant’ when the subject matter is dealing with a topic as heavy and bleak as the literal end of the world, yet that’s what this is. Triumphant. Happy even (mostly). Giving thanks and smiling at what we had and the love we knew, not the time we’ve lost. And it’s beautiful in its bleakness. For while it’s all done, and there’s nothing left, there’s somehow still hope. Or at least, that’s how it makes me feel. It’s a tale of a mother and son on their final day on earth, and the earth’s final day itself… and yet it’s got so much to make me smile.

People on first inspection may think that Triumph & Disaster bares a very similar ilk to Departure Songs. This becomes immediately apparent to be false though once you peel back the skin and delve deeper. While Departure Songs dealt with glorious failure and death on a largely intimate scale, Triumph & Disaster pulls you headfirst into the actual end of the world. There’s no coming back from this one. It’s the final sign off, the last hurrah, the end of times. This is, quite literally, it. It’s funny, as I’ve been comparing both albums back and forth for a few weeks now, and my end conclusion is that while they both deal with heavy subject matter, loss, death, depression and sacrifice, Triumph & Disaster is actually a ‘happier’ album, while the content matter is darker and bleaker.

And make no mistake, to me this is a much happier album. The songs have a certain shimmer and shine to them, a band releasing themselves and giving over to the music, allowing the songs to pulse and breathe. There’s a definite evolution to the sound, while still retaining that unique ‘We Lost The Sea’ sound sonically that has become a hallmark of them. It’s definitely THEM, and we’re lucky to have more of it. While Departure Songs was almost clinical, restrained and careful, Triumph & Disaster has a feeling more of a band exploring themes and styles, allowing them all time to evolve and grow.

The album opens with ‘Towers’, a buzzsaw guitar pulling you in and building into a rollocking beat and riff until we come into the breakdown. All shivers and shimmies, a compound beat propelling you forwards. And Matt’s piano here really gets a chance to shine and it’s glorious to hear it. A falling, almost ‘boozy blues club’ feel to it acting as a counterpoint to the bludgeoning riffs reminding you that this is the last day on earth. And then we ‘re spoilt and get even more in the breakdown, delicate chords and atmospherics swirling and evolving, conjuring up a mental picture of a small hand held in a mother’s as they walk across a bleak landscape. An earth dying. One last spin of the wheel. And this keeps building and building. Onwards inexorably, knowing that a peak is coming and powerless to stay away. Layers intertwining and developing, crescendoes rising until we’re left with nothing…. And then it explodes all over again into glorious, frenetic noise. One final peak before it peters out into a wash of feedback.

Next up is ‘A Beautiful Collapse’. A delicate intro developing until it’s swamped by a huge, sludgy bass line that throttles you – but then the wall of sound that follows is one of the examples of this album sounding ‘happier’ to me. It’s not all minor keys and bare walls, even though we’re following some heavy shit here. This is a ‘road trip’ sort of song. It’s shouting at the sky on top of cliff. It’s letting go, and finding power in the release. And it’s heavy and dark and beautiful. It’s got a keyboard squelch that is like a wet foot stepping on your throat in the best way, chiming guitars and a palpable sense of anger and aggression all through it that mark the next step of the last day on earth.

Then it’s time for ‘Dust’. And it’s all spaghetti western inspired twangy guitar, mournful muted trumpet, lightly tinkled keys and a wild wind blowing from the west. This is the soundtrack to walking towards a settlement on the horizon in a forlorn, cursed land, dust blowing around you and obscuring your vision. Only to arrive and find it not just deserted, but dead. Vacant. Expired. Only you and tumbleweeds. And the endless dust coating everything.

‘Parting Ways’ starts with the feeling of smoky, low roofed bar. Mother and son walking in to find a house band playing a stilted, jerky riff in the corner on a low stage as they order a drink. Mother looking around, her son’s hand tightly clutched in hers. It’s all guitar driven and has a sense of urgency and underlying foreboding to it as it builds, the clean chiming guitar not giving anything away yet. And then Kieran’s bass and Nathaniel’s drums remind us of where we are, and what’s happening. And then the guitars. Oh the guitars. Cutting across your throat, bleeding you and leaving you lying on the floor like a sonic mugging. Parting Ways indeed. But with who? Or what? I like to think of this track as Mother & Son parting ways with society as a whole. There’s no more point staying to see if anything can be salvaged. It’s time to turn their backs one last time and depart.

Which moves us on to ‘Distant Shores’. A melancholic, delicate, almost country styled track that conjures up images to me of a grizzled old troubadour watching a sunset one last time, a dented old lap steel guitar across his knees. It’s coming. It’s all coming and there’s nowhere to hide or run. We’re all fucked – BUT there can still be moments of solitude and peace to be had, however fleeting they are. It’s gorgeous and achingly fragile, and really sets up well the last two songs.

And then we get to ‘The Last Sun’. The longest track on the album at almost 15 minutes, and the most bleak, brutal thing on here. There’s no light from the last sun – it’s all colourless and void. The last sun indeed. This is the final last death throes of a dying world, a doomed populace and a sad finish for humanity. Dissonant chords churning and building, pressure rising and driving us forwards towards the inevitable. Until a few minutes in, when it collapses upon itself and we’re left with… Beauty. Fragile, delicate beauty. A slow smile as the last warm rays of a dying sun hit your face. A final caress before the end. A last, wistful sigh tinged with regret and sadness of memories past and a future lost. And yet somehow I still feel uplifted by all this. Perhaps it’s the shared sadness, or just the knowledge of understanding that you won’t be alone, but it’s there. It’s present. And the guitar lines sway and develop, the drums keeping a marching time towards extinction. Beauty in decay. Sublime sadness. It swirls around you, drawing you in without pause, like an inky blackness enveloping you. Mother & Son together alive one last time, sharing a final breath before the inevitable. And as the track builds, adding layers upon layers, you’re left with the realisation that this truly could be the soundtrack for the end. Unforgiving and without pause. And so those chunky chords combine and the dissonance swirls, nasty little inflections skidding around you and cymbals crashing into you. A syrupy bass pulling you deeper down. And while it careens into you, it’s suddenly…gone. It has decayed and died, just like you. Like everything. The last sun has set over a shattered land.

And so, the epitaph. ‘Mother’s Hymn’. And what an achingly beautiful, amazing, perfect track to finish with. It is quite simply sublime, and gives me shivers every single time I hear it. It’s fragile and delicate, clear and purposeful, melodic and happy, while all being a little too late. I cannot recommend this track enough – and the album before it makes it even more powerful. On it’s own it is a gorgeous track, but as the coda to this album it is sublime. It’s not just a finish to this album – it’s a finish to humanity. To culture. To belief. To the love of a mother and child. And yet – it’s happy. It’s rejoicing in creation and love. It is, in short way, EPIC. And I dare you to not get shivers when you listen to it. I dare you. You might even shed a tear. It’s one of the best things you’ll hear this year, if not the best.

So, We Lost The Sea have done it again. They’ve done it again, and yet in a different way. This album is an evolution of their sound, their imagery, their songwriting, their use of sonic palettes… the lot. It’s a concept album that deals with some heavy, deep, bleak stuff but at it’s heart is about love.

And after listening to this album a lot over the last while, here’s the one mental image I get that keeps forcing it’s way to the top of everything else: a mother and son, dead, tightly embraced together. And as their bodies turn to dust and the wind blows them away at the end of the world, we can still see their loving smiles.