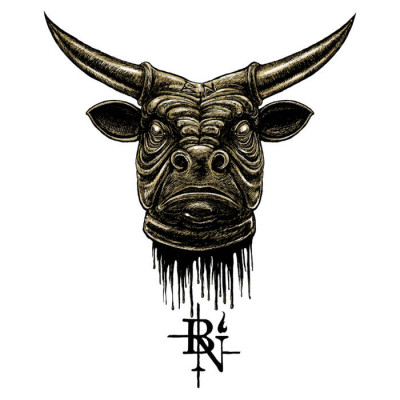 I didn’t think I liked sludgy stoner death-doom. Turns out I was just listening to the wrong bands. Because if this ugly block of ooze is anything to go on, it is a niche worth exploring.

There are two mysteries surrounding Byzanthian Neckbeard. The first is the name. It’s either inspired or ludicrous. Actually it’s probably a combination of both. The second is the band’s location: Guernsey, an idyllic if foggy island in the English channel just off the coast of France. It’s most famous for its low tax, pleasant seaside towns and deserted beaches ripe for retirees. It is certainly not known for harbouring hordes of howling hirsute hobgoblins who describe their music succinctly (and correctly) as “heavy as fuck”. The incongruity begs the question: just what do they do to kids in Guernsey if three of its sons have come out wanting to make this sort of racket?

And what a satisfyingly gory, fun racket it is. it follows hot on the heels of their three-song EP Extinction and picks up where that one left off – albeit with a fuller, richer production. The riffs are thunderous, the tone is thicker than a castle wall and the twin vocal assault of roars and barks (shared between guitarist Phil Skyrme and Dan Robilliard on bass) give an air of malevolence that make you wary of playing the album in an empty house.

It begins with a Vincent-Price-style spoken intro, which revels in the gory description of a were-spider. You don’t know what a were-spider is? Well, you’re in luck, because that is the name of the first song. And by the end of it, if you aren’t roaring along with the chorus of “I am the were-spiderrrrrrrrrrrrr!” there’s something dead inside you.

We learn right from the opening bars of ‘Were-spider’ that drummer Paul Etasse isn’t shy of a double-kick, nor is he content to thump out a dead-eyed doom beat for the entire record. Fills, time changes and switches to beats with full-blown head-nodding groove – and the occasional blast beat – keep the sound fresh. Well, as fresh as sludgy stoner-death-doom can be of course.

We stick with creepy-crawlies on the third track, ‘Devil Worms’. And again, the chorus – consisting of repeated shouting of “Devil woooorms!” – is one to get stuck in your head. Ha! A genuine ear-worm. Of the devilish variety.

The title track, which brings back a spooky spoken intro, has a palm-muted riff that is so metal its name may as well be cesium (the most metallic element on the periodic table, science fans), wear a battle jacket with so festooned with band patches that it looks like a quilt and burn churches before breakfast. And just as you begin to fear you may be riffed to death, ‘Evisceration Stare’ follows and its swirling guitar work and neck-wrecking tempo switches send you spiralling willingly into whatever abyss this music may have crawled out of. And there is no let-up. ‘Necron5’ is another highlight, starting as it does in a stalking, atmospheric way, before upping the speed to stoner-rock level.

I could go on about how the riff that makes up the verse of ‘Condemned to the Swamp’ deserves to have a prominent place in the Great Damp Hall of Fine Sludge Riffs, as does the riff in the song’s chorus. And I could go on for ages about the final track, ‘Out of the Deep’ and its Neu!-for-zombies krautrock tinges. But I won’t.

Because describing riffs is a bit like telling strangers your dreams (we’ve all had those conversations when someone says “this is awesome, it goes, ‘dzun, dzun, dzun, duuuuuuuuh, dzu-dzu-dzu-dzu-dzu duuuuh, dudududududududuuuuh’” and you have no clue what they are talking about). Just be assured that this album is full of great riffs, all of which are of a Goldilocks calibre – not too simple, not too complex, brutal enough, groovy as Bootsy, heavy as fuck… just right.