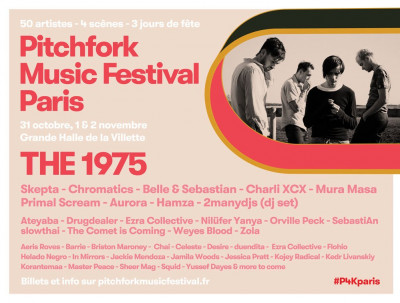 Devotees to the sounds of hipness, rejoice! The time has come for your sacred, yearly mass, for the Pitchfork Festival will shortly return, bigger and bolder than ever, for its ninth consecutive year at the Grande Halle de La Villette in Paris. Produced once again by Pitchfork, La Villette and Super!, the festival will be trying out a few changes this year, to keep the experience as fresh and experimental as a lively college dorm. First off, the two-day warm-up party known as Pitchfork Avant-Garde will not be held this year but will be traded off for an extra two stages at the La Grande Halle. With four stages on the main site, this will surely mark a big shift towards a more traditional, more dynamic festival experience. Second of all, this European edition of Pitchfork Festival will be mirroring its twin sister from Chicago in its stylistic shift. Whereas fans of last years’ sunny, indie-pop rock and synthpop lineup will have more than enough (vegan) meat to sink their teeth into on Friday and Saturday, Parisian audiences best brace themselves for opening day. It is safe to assume that Paris will have never seen anything quite like Thursday’s lineup, which marks a heavy return towards hip-hop and urban music. Most surprising of all is the heavy emphasis on Grime and, urban music from across the English Channel.

Headlined by none other than London Grime superstar Skepta, the first evening with Pitchfork in Paris will combine some of UK’s key players from the underground scene – namely AJ Tracey, Slowthai, Mura Masa and Flohio – with a number of local French and Francophone artists such as sean, Zola, Hamza and Hateyaba, a rare pairing if not a first for both musical worlds. Such boldness can only spark curiosity on our end, and although we may not look forward to every single act playing on Thursday, we certainly are most excited to see how this ambitious endeavor will turn out. Last but not least, we also look forward to hearing Kojey Radical’s funky hip-hop musics, Yussef Dayes’ airtight afrobeat-fused jazzed up drum grooves and EZRA Collective’s majestic jazz extravaganza!

The smooth, ethereal synthpop and pop-rock sounds will return on Friday with Loving’s nostalgia-drenched psychedelic folk, Jackie Mendoza’s echoing dreampop soundscapes and Chromatics’ italo-synth pop aesthetic. Most importantly, those up to date with this years’ hottest releases will surely know better than to miss Weyes Blood and her heart-melting rendition of her latest psychedelic-folk full-length Titanic Rising. Day number two will also include some grittier, garage-dwelling rock acts such as Brighton’s Squid, Nilüfer Yanya’s lo-fi guitar rock sound and Sheer Mag’s catchy Joplin-meets-Thin-Lizzy fusion. Amongst the more atypical acts of the evening we look most forward, we also have Sub-Pop Record’s masked cowboy known as Orville Peck, who will also be joining the festivities to add a bit of country flavoring to the mix, Chai from Nagoya with their sweet yet noisy electro-pop energy, and none other than Glasgow’s Primal Scream, whose dance-meets-alt-rock rhythms will surely get the dance floor grooving.

Closing off with a headlining set by The 1975, the third day at Pitchfork Music Festival will make way for a number of female solo artists and electronic music heavyweights. Nineteen year-old Korentemaa from Sweden will surely get the crowd swooning over her smooth voice and bareboned indie-pop songs, whereas Jessica Pratt will have you drifting away to a faraway time and place, to the sounds of her dreamy, reverb-heavy folk-pop tunes. Jamila Woods will be seducing senses with some groovy, soulful R&B with an irresistible touch of homegrown Chicago grandeur, Caroline Polachek will be proving her chops as a solo artpop performer with brand new full-length PANG, and Aurora from Norway will hit the stage with high expectations freshly hatched from her sophomore album A Different Kind of Human (Step 2), a blissful journey into immaculate, heavenly soundscapes unveiled by the 23 year-old’s angelic voice. Some of our most anticipated acts of the whole festival will also be saved for last, as Saturday evening will see the Charli XCX – Britpop’s very own queen – hitting the stage for one last round of supercharged, Girl-power badassery, followed by a late set by French Touch badboy SebastiAn, who will most likely be sharing some new cuts off of his long-awaited sophomore record to tear down whatever will be left of the venue and its dwellers.