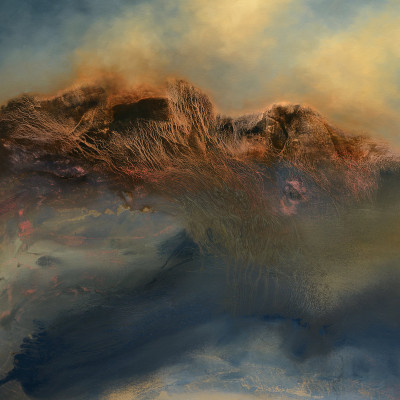 Pyroclasts begins with deep sounds unfurling like the wings of a quetzalcoatlus in the morning light. Wings that beat their first and heaviest, causing trees to bend, buckle, and all manner of avian habitats to skitter and tumble to the earth. Dust kicks up in a whipped pool. Fur and scales shrink back into underground hollows. Each flap of a wing is enough to strobe light into night for the world beneath.

Borne out of improvised sessions beginning or closing the day’s recordings, these 4 heaving artefacts rely more upon the synchronicity of the players (which feature Tim Midyett, T.O.S., and Hildur Guðnadóttir in addition to the be-robed duo) than the carefully carved pieces on recent predecessor – Life Metal. Nevertheless, their approach remains an engulfing wash of maximalism and minimalism. It is over saturation with apparent simplicity. Neanderthal in its ecological connections. Utterly human in its resonance.

That these tracks are more instinctual and reactive gives them a sense of being closer to the human experience. They are of the moment. Open to err. Reflective of mood and experience. Any attempt to take charge and lead within these impromptu compositions must be carried out with confidence in order to banish any fear of clashing and breaking the spell. In this respect it’s not just humanity that it is closer to, it is nature. By discarding any carefully-annotated plans, the band are eliciting automatic responses. They are existing in the moment. This is Sunn O))) replicating their live experience. They feed(back) off of one another, ride the swells and surges like these are natural rhythms. Like they are tides, currents, cycles, or seasons. This harks back to ancient ways. If Life Metal was a tilting of heads towards the heavens, then this is twisting focus back towards the dawn of time. Syncing with natural ebbs and flows. These patterns occur in nature. Why not harness them? It’s the sprawl of land masses. The raising and lowering of seas. Peaks of mountains peeking through rings of clouds. And all of that is referenced in the downward strum of a guitar or a depressed key on a synthesiser.

Where there are notes, there are connections. It kickstarts memories from within your cells. Not necessarily memories from your own lifetime. But something communicated from a deep past. The squall of sounds mirroring a deafening silence. Third track, ‘Ampliphædies’ feels more panicked. Under threat. Can we read from these performances as to how that day’s recording sessions went? Whether or not sleep was interrupted by troublesome dreams? The inference is human and of the present just as much as it is also reaching into passed aeons. O’Malley and Anderson talk of elementalism, of atomism. This is akin to separating out our constituent parts. Parts made up of dust specks left over from dashed debris that still scythes through space. As Life Metal regarded the great beyond, viewing stars and distant galaxies, it was journeying through time and considering the very building blocks for life.

The time travelling doesn’t just shoot back to the creation of the universe, album closer – ‘Ascension’ – recalls an earlier Sunn O))) release: the shrill whirring rewinds to the opening attack on ‘It Took The Night To Believe’ from 2005’s Black One. This self-referencing doesn’t stop here. The band have suggested that you could interweave the tracks from Pyroclasts with those on Life Metal to create a new, more immersive experience. It is important to note the value of the word “immersion” when talking about their sound. It’s not a simple happenstance. A skim over a half-baked idea. It’s all-consuming. Overwhelming. A submission, if you like. A sonic self-sacrifice. Sound can reshape molecular structure. Let Sunn O))) reshape you.