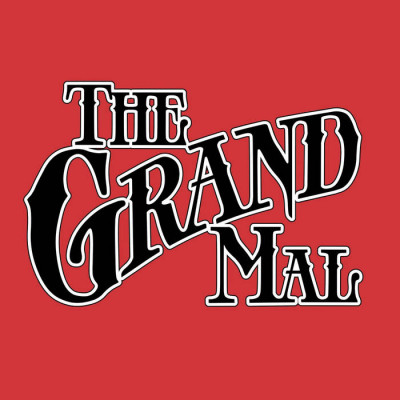 The Grand Mal started life in 2015 as a mash-up of members of Desert Storm and the recently defunct Mother Corona, both of whom had graced the local Oxford metal scene with their presence for a number of years previously, as well as touring extensively throughout the UK. Featuring Desert Storm’s twin brothers Ryan and Elliot Cole on guitar and drums respectively, Mother Corona’s Dave-O on vocals and Rob Glenn on bass; The Grand Mal have brought together a wealth of talent and expertise for their eponymous debut record. This record comes following a brief hiatus after originally forming for the Coles to focus on Desert Storm (as well as their Buried in Smoke Promotions which organises gigs around the Oxford area) and Dave and original member Lee Creesey (also previously of Mother Corona) to concentrate on their own project My Diablo. Fortunately, 2019 gave the opportunity for them to come back together though, and with that opportunity comes a stellar debut record.

The record literally ‘Explode’s into life after teasing the listener in with Elliot Cole’s drums kicking things off, then a funky bass riff coming in before Ryan Cole’s chugging guitars set up a great build into a heavy riff-based frenzy which is capped off by Dave’s sharp vocals bringing the whole piece together. This is no nonsense hard rock, which is in the hands of those who really know what they are doing, and this is the case for the rest of the album. The next track ‘No Man’s Land’ again keeps things nice and simple with a riff you can sing along to, air guitar to or just bang your head to (or any combination thereof) and some lovely groove-ridden vocal work which keeps things interesting. ‘Burning Truth’, which is the single to have been released before the album, is a slower and more considered song that still keeps many of the same elements as the previous two. The verses are softer, building into the bridges and choruses that again bring back the stoner rock-style crashing drums and slow riffs. The Grand Mal are able to accomplish a lot with very simple song-writing devices, and ‘Burning Truth’ is an excellent example of this where some simple chords and drum fills make for incredibly effective interludes.

The Grand Mal has a lot of variation on it, and is not just a basic hard rock album. All members are well versed in stoner and doom music, which shows up numerous times throughout the album, but unlike with the members’ other projects, it takes more of a back seat. Whether you consider this a good or bad thing will largely depend on your views of those particular sub-genres, but the really great thing about the record is that any fans of hard rock music will find something to like in this record. If you lean towards the heavier end of the spectrum, then the aggressive riff-work of ‘Liquid Death’ and ‘Pig in the Python’ will undoubtedly leave you satisfied, with the former injecting a heavy dose of psychedelic fuzz and the latter featuring a great guest solo by Lee Creesey. Whereas ‘Glitch’ has a more dirty punky feel to it, ‘Eschaton’ has more of a doomy quiet-loud feel to it and ‘Significant’ closes the album off in a far softer and mostly instrumental manner, with Dave’s expressive vocals which help ground the album throughout making only sporadic appearances.

In fusing together existing bands and a diverse set of influences, what The Grand Mal have created is a work of real quality, which plays to the strengths of the musicians involved. It is a highly entertaining listen that uses straightforward riffs and a pummelling rhythm section to the maximum effect.