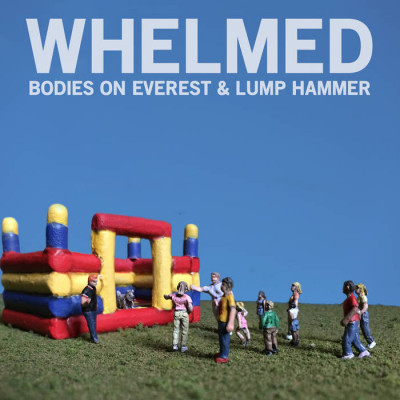 WHELMED by Bodies on Everest and Lump Hammer

What do you usually expect from a ‘split’ release? An EP, perhaps? Maybe two or three songs each from a couple of bands, yes? Well, not so here, with the latest thing from the North-East’s favourite hit factory. What we have here is, essentially, two full albums – one each from Newcastle’s Lump Hammer and Liverpool’s Bodies on Everest. Two separate CDs or cassettes1. One hundred and a bit minutes of distorted, punishing, mind-melting loveliness. So, as this record is credited to Bodies on Everest and Lump Hammer, in that order, let us, in a spirit of perversity, start with the latter.

There is no build up here. Nothing at all. We are hit head on, with no warning, with the RIFF. For that is what ‘Pig Fish’ is. A big fat baritone guitar riff, pounding propulsive drums, and what sounds like a crazy man2 yelling at a bin. Nothing else. No frills, no brakes. A headlong rush of mutated turbo-sludge, the bastard offspring of Jesus Lizard and a train crash. It’s brilliant. Reminds me a bit of something by Torche, years ago. ‘Tarpit Carnivore’ , maybe, but with less melody3. Well, no melody at all, to be fair.

Straight into ‘Riddled’ more of the same but a bit longer, the RIFF a bit slower, and then on to the superbly gloomy ‘Tired’, in which we find just about the only moment of subtlety of the whole record. It’s sparse and weary and Watts groans “Tired, so tired, so much to do…” over and over. It’s easy to imagine some poor bloke slumped over a pile of meaningless paperwork, banging his head in frustration on his desk, day after day after day. And then the RIFF comes down on him, pure grinding, soul crushing misery. Modern life, eh?

More grinding, repetitive grimness follows in ‘Manual Labour’, a song, I’d guess, about the grinding repetitive grimness of manual labour. As someone who heaves around crates of carrots4 for a living, I can relate to this. Oh yes. Then there is ‘FFS’, less a song and more of an endurance test. More than 16 minutes of harrowing… I was thinking ‘harrowing what?’ there, but no, it’s actually just 16 minutes of harrowing. Fuck me, this is grim. Impressively grim. There is no light here, no relief. It just gets in your head and scrapes away at the soft stuff inside. And then it stops. I’m not sure if I’m glad it’s over or if I wish it would go on forever. My wife would hate it. I don’t.

It is unlikely that you will step away from this record humming one of its merry tunes. This is not a party record.

So, is the Bodies on Everest bit of the split any more cheerful? Any easier on the ear? Well… It’s longer, for sure. See that bass bit at the start of opener ‘My Mother In The Mountains Affects My Gym Coat At Work’? Well, you’d better get used to those few notes, because you’ll be living with them for a long time. The work of one of two bassists in the band5, it’s a relentless, unstoppable thing. It’s not in any hurry, rumbling steadily along whilst the other bass probes and scratches away at it, gradually wrapping it in denser and denser layers of unsettling distorted sound. Eerie electronic stabs and squalls come and go, and the drums join in to push it all on a bit harder. Never faster, oh no, just harder, bigger and bigger until it’s simply huge, an enormous, rampaging construct of screeching, jagged noise and ear-shredding feedback. Somebody -it could be any one of the three of them – shrieks incoherently from time to time, but the behemoth ploughs on and on, driven by that bass throbbing and pulsing in its heart. And then, because this is always the way of things, it ends, and twenty minutes have passed.

I think we should take the next two songs together as one, a question and an answer, ‘Can Ghosts See Dogs?’ and ‘(Yes)’, for they both feature exactly the same lumbering rubbery bass riff. The former leads off with a vocal sample – someone warning us of the dangers of drugs6 – before the big fat bass comes along accompanied by minimal drums and some whispery little noises. I allow myself to be hypnotised by the pulse of the song – bom, bom, baoww, bom, bom, baoww – but an unexpected voice inviting me to turn the cassette over to continue my adventure breaks my immersion. It’s startling, and maybe somewhat unwelcome. After the interruption, there is only a baffling mix of ambient traffic noise, total silence and a tiny outbreak of organ. I’m confused.

All is not lost, however, as ‘(Yes)’ resets us back to the beginning , becoming the song that ‘Can Ghosts…’promised to be. Structurally, to be fair, it’s little different from ‘My Mother…’ – a prowling bass riff gradually accumulating a dense and menacing swirl of clattering and slashing noise, incoherent screaming. It just comes on and on like an army of gibbering demons, at its heart a towering troll dragging massive chains and beating out the marching rhythm on a pair of drums made of bones and skin7.

So, clearly Bodies on Everest have a formula going here but, as each song relies totally on relentless repetition, that can hardly be a surprise. And the formula is applied again in ‘Kicking My Landlord’s Head In’8, the last song on the album. Just to vary things a bit, though, the song sets off at a breakneck pace, kraut-rocking like an out of control tank on the autobahn. But, yes, it’s the same story – bass riff, propulsive drums and an accumulating tornado of scraping, shrieking, crashing and howling noise. But what a story!

Of course, this isn’t going to be everybody’s cup of tea. Not even the favoured tipple of a significant portion of the population, I’d say. But if unhinged repetitive clattering chaos is your thing, buy this record. Like I said up there somewhere in the Lump Hammer bit, my wife hates it. I love it.

FOOTNOTES:
1. None of that fancy vinyl nonsense here.
2. The ubiquitous James Watts, who yells at a bin for just about every band in the North-east of England, except for, maybe, Lanterns on the Lake.
3. Probably doesn’t sound like it at all. It’s a long time since I listened to Torch.
4. And other fine vegetables and fruits.
5. The taller one, the one who isn’t Wárs
6. Apparently, rats like cocaine. Who’d’ve guessed?
7. You know what I mean, you’ve probably seen the Lord of the Rings movies too.
8. They do a fine title, so they do.