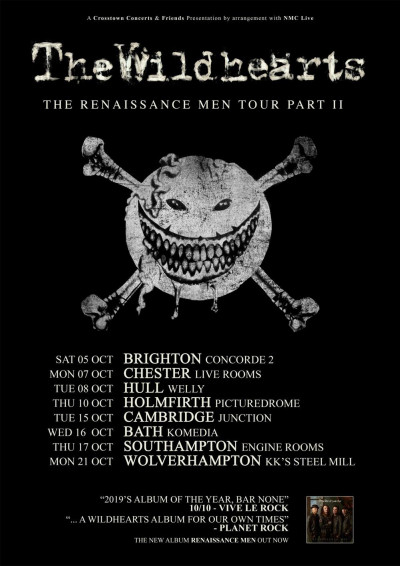 The Wildhearts at The Live Rooms, Chester

The Wildhearts on the web:
Website | Facebook |
Support: The Professionals| Janus Stark
October 7, 2019 at The Live Rooms, Chester
by Steve Fallows | November 1, 2019 | Live

It’s been a busy year for The Wildhearts. After the success of the comeback album Renaissance Men the lads went out on a tour that started in clubs and ended up in some festival headline slots as the band went from strength to strength. Now, with a new release in the bag with the excellent Diagnosis EP, they’re playing a string of UK dates before heading out again to Europe.

First up tonight are Janus Stark, a blast from the past for a lot of the fans here. I saw them a number of times back in the nineties and, from what I remember, to pretty mixed receptions as opening bands on some big tours. Tonight was different: they seemed on top form and playing for an appreciative crowd, which they seemed to feed off throughout their set. They are back with some new material and, led by frontman (and former Prodigy guitarist) Gizz Butt, they had an energy that I hadn’t really seen from them before. Being an opener there wasn’t too much time to enjoy them, but enough to prompt me to dig back through their catalogue and look forward to seeing them again sometime soon.

The Professionals were up next and, after their triumphant set at the Scott Sorry benefit show in Wakefield last year, there was only one way this was going to go – their classic old-school punk rock going down an storm. With Tom Spencer leading a singalong through sex Pistols Classic ‘Silly Thing’ and the dedication of ‘Monkeys’ to a certain Boris Johnson, their humour built on the atmosphere and goodwill that their tunes had started. Having a couple of members with Wildhearts’ connections doesn’t harm that either – Danny’s brother Chris McCormack on guitar and Toshi, from Ginger’s solo band, on bass, made this a perfect combination to build up to the headliners. A band that wherever they are on the bill, always guarantee a good night.

The Wildhearts exploded onto the stage, opening with the title track from their latest EP, and for the next 90 minutes showed again why they are one of Britain’s greatest rock bands. With the new album and EP adding more tracks to an already stacked set list, there is now more interest than ever to see what the band will include and if there are any surprises thrown in. Just like the shows in May, the band have been adding a few rarely performed tracks into their set for this run with ‘Jackson Whites’, ‘Action Panzer’  and ‘Mindslide’ given an outing to a predictably warm response. Other new songs on show included ‘My Kinda Movie’, ‘Dislocated’ and ‘Let Em Go’, and some of them are already feeling like they have around for years. There is the usual between-song chat from Ginger and people in the crowd, as well as some additions from Danny and CJ who all get a big reaction when introduced.  Before you know it the set is done and the band are gone, but they soon come back with another three tracks to unleash before getting back on the road to the next show. ‘Top Of The World’ is still a perfect example of what this band do so well – ridiculously catchy chorus, some mean riffs and an energy that a band half their age would be jealous of; and to finish off, the band played live favourite ‘My Baby Is A Headfuck’ to give the crowd one last chance to singalong before letting them loose into the cold October night.

As a fan of nearly 30 years, I know I’m biased, but this is a band on the form of their lives; and with another run of shows planned in January (once Ginger has done a run with his new backing band The Sinners in November), this momentum doesn’t seem to be slowing down anytime soon. Long may it continue.