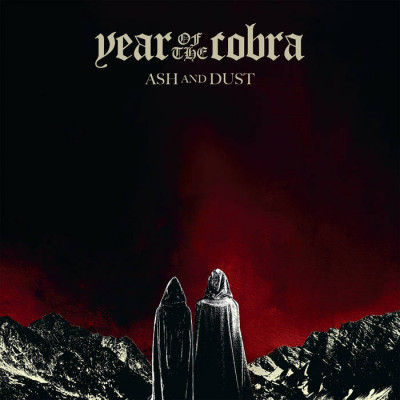 Ash and Dust by Year of the Cobra

There appears to have been a recent proliferation of doom bands that boast a large dollop of melody. You could blame Windhand – or go back to Ronnie James Dio-era Sabbath if you really wanted to get to the root of the cause – for influencing a host of bands that like to have a little tunefulness with their riffage. The only problem is that the genre offers few places to hide. And unless the vocalist is top-notch (like the two aforementioned bands) then the whole vibe can get a little, y’know, witchy or wizardy.

Thankfully Year of the Cobra have a vocalist who can sing. Like sing. Goose-bump levels of singing chops. The duo are a band who have welcomed in melody to accompany their heaviness and on perusing their fourth release – and second full-length album – Ash and Dust, four things hit home: they know their way around a writing a great song (and their relentless touring schedule has infused depth and gravitas into their songwriting), they don’t need a guitar and the vocal powers of Amy Tung Barrysmith are incredible. She can do mournful, vicious, strong and ethereal all in the space of one side of a 12-inch slab of vinyl, to offset her thundering bass and her husband Jon’s Bonham-level drumming.

And that is all they need (with the addition of a few effects pedals) to create a work that boasts far more variety, tonal variation and emotion than seems possible from two people.

This album is the first on Prophecy Records and also marks a collaboration for the first time with Jack Endino (who produced Nirvana’s Bleach and Incesticide, as well as a truckload of other grunge bands), having used Billy Anderson (Sleep, etc) for their previous two records. The difference is immediately evident. Gone is the echoey sound of Anderson and in its place are rich, heavy bass tones and drums that are as big and crisp as a giant freshly fried popadom. As heretical as it may be to say, but the band sounds bett… no I can’t blaspheme the great Anderson. Let’s just leave it at “this album sounds great”.

Take the album’s opening three songs. ‘The Battle of White Mountain’ fades in with a rumbling Rickenbacker accompanied by “ooh oooh” for the first couple of minutes, before Amy tells the grisly story of said fight. So far, so atmospheric. This is followed up by ‘The Divine’, which has a driving groove to it thanks to Jon’s drumming and an earworm of an almost one-note vocal melody. Then the title track (which had our army of copyright lawyers twitching, we must admit*) whacks you around the face with some Lemmy-style bass chords, some genuine punk-rock speed and a combination of a sneering shout and gang vocals last heard from this band on the title track of their EP Burn Your Dead.

‘Demons’ allows things down with a tense, creeping-down-a-dark-alley feel to it, while ‘Into the Fray’, the lead single, has an almost bouncy riff holding it all together. The chorus, meanwhile, is made for a singalong. No, really. You’ll know what I’m talking about when you hear it. Speaking of melody, check out ‘At the Edge’ for size (and no, it isn’t a Stiff Little Fingers cover). Melancholy, groove, a middle-eight that has you sharing at the stars, enough instances of “woah” to satisfy even a Shangri-la fan… This song pretty much has it all.

‘Black Swan’ gives us more tension (and a HUGE chorus), before the album’s closing track, ‘In Despair’ has Jon laying out (got that phrase from the liner notes to a Miles Davis album) until the final bar, to leave Amy and her bass accompanied by crackling sound effects, as her voice is pared back to a near whisper, singing chilling lyrics about… well, despair.

*We have no lawyers, copyright or otherwise. And even if we did, they’d dig this album too much to care about litigation.