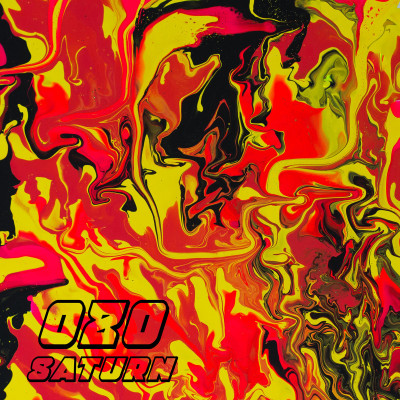 Given that Mike Vest’s work-rate never seems to let up, it can be quite daunting, and a little wearying approaching yet another release from on of his umpteen bands, yet with OZO he really does have something which demands you to listen. Not that you shouldn’t listen to all his other stuff, although a future primer may provide some inkling of where to start if uninitiated, yet with OZO he seems to have tapped into a realm which has not quite reached his grasp…that of free jazz.

Now, you can argue the fact that in fact, all his music is based in some way on free jazz, and given the propensity for his space rock shenanigans to expand both their length and your mind, you are never too far from a “freak out” moment. Here, on Saturn, that “freak out” is truly gripped by the horns and thrown straight at you though, making for a quite enticing listen.

It’s probably best at this point to cast a warning that this may not be for the uninitiated. OZO are deep, and by deep we mean hitting straight into the heart of the Sun Ra psychedelic explosion whilst imbibing a mouthful of Frank Zappa acid tabs…do they exist? If not, they should do. We digress, or rather, trip lightly on.

So the music…well, it leaps right to the point as the alto sax on ‘Lifeship’ grips you and pulls you head first into a maelstrom of noise. This noise then never lets up until the very end, and even then it’s arguable that the music still plays on in some other region of your mind, never to let up, a constant keening sax, knocking on the confines of your skull to be releases. That release has happened though, for the full glorious 40 minutes or so that Saturn unravels your mind. It’s playful, it’s frightening, it’s jolly well looking for a good time and will not stop until it finds it.

Listen, if you want an album that is gonna test you, whilst also being a damn fine listen then this is for you. That is, of course, if you fall into the category of the heavy psychedelic free jazz section in your local HMV store (they tried it in Tesco, but those Adele albums next to it caused eruptions in the ether, causing a few babies to cry). If that’s really not your bag then stay well away. For us here at E&D towers, well, this is our morning cup of tea quite frankly, and use it to as a wake up call on our morning car journey to work. Obviously later it soundtracks a more bohemian vibe but hey, that’s too crass. Turn on, tune in, and drift out….man.