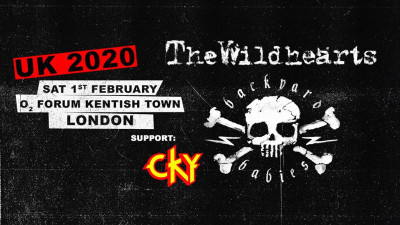 The Wildhearts at Kentish Town Forum

There aren’t many rock ‘n’ roll bands that can claim to have supported a 30-year-plus career without losing their edge – neither burning out nor fading away – but, occasionally, two of them come along at once.

I remember reading a gushing five-K review of the Backyard Babies’ second album Total 13 in a 1998 edition of Kerrang! where the reviewer argued that, if you can get into this, then you’ll never really be boring, or tired, or old. Aged fourteen this sounded like good advice; I thought it was a solid gold classic and still do today, even if I’m not entirely sure I’ve escaped such a fate. Alongside The Wildhearts’ debut Earth vs The Wildhearts, it’s one of the absolute best rock albums of all time, (rivalled perhaps only by Appetite for Destruction). Big claim I know. Well, given the long history of collaboration between the Hearts and the Babies, the prospect of them touring together – playing long, co-headlining sets none-the-less – is both natural and awesome.

But first, openers CKY are something of an institution themselves, even if I never got into them back in the day. Firing up the Forum crowd nicely, CKY play a hybrid of alt-metal, stoner rock, and grunge that would have no doubt made them my favourite band of the moment circa 1998 if someone had pointed them out. Catchy, unpredictable, heavy yet melodic; energetic in a slacker, Cali stoner kind of a way; tight and impressive without being too flashy – it’s difficult to fault them at all.

CKY have to rank among some of the best power duos (Urfaust, early Ghold, Monolithian, Death from Above 1979, Hyena Kill, etc.), and I’ve always liked the way that this stripped-down nature forces them to adapt, to innovate, to compromise productively, be this through effects, playing style, or instrumentation. While I don’t know CKY’s tech spech, I have no doubt that this is the case – Chad Ginsberg certainly has a pretty unique take on the bass-octave guitar sound.

From what I can gauge, their set includes ‘Attached at the Hip’, ‘You’re Insane’ and ‘Head for a Breakdown’. To conclude, Miller introduces their inevitable hit ‘96 Quite Bitter Beings’, saying “I’m guessing, if you’ve head one song by CKY it goes kinda like this: dun-un-nun eer, dun-un-nun eer introduced”. While that vocal rendition sounded more like Sum 41, it’s actually a beast of a track and, despite their awful name (Camp Kill Yourself?), I’m a late-stage convert.

Giant whirling blue lights, swirling phaser and police sirens can only mean that the Backyard Babies have emerged on stage, smashing straight into ‘Good Morning Midnight’, and it’s immediately clear that, after all this time, they’re still a lean, mean, glam-punk machine. New track ‘Shovin’ Rocks’ is a testament to this longevity, both in terms of direct lyrical content (“I’ve been shovin’ thirty years of rock and roll”) as well as the fact that their raw enthusiasm ensures that they can still pull off such an endearingly cheesy track. With Dregen taking over for a lot of the vocals, ‘Shovin’ Rocks’ owes a lot directly to Chuck Berry, as does much of Dregen’s style – apart from the maracas that is! ‘Nomadic’ is a great newer anthem, even if I hear “Nomadic you, nomadic me” as “a man with a cure” or something similar. Leaning towards new material tonight, ‘Heaven 2.9’ is the first track I recognize, complete with sing-along chorus and killer solo. This is followed immediately by the droning open riff of ‘Highlights’, a genuine banger from Total 13 to which we go suitably nuts, with Dregen standing up on the amps in a spotlight, still very much the androgynous king of trashy cool that we know and love. Singing happily along off-key, for me ‘Highlights’ is a track that does exactly what it says on the tin.

Time for some acoustics now as ‘Painkiller’ is dedicated to people struggling with addiction, with Nicke Borg giving a special shout-out to Hearts’ bass-man Danny McCormack who rejoined the band recently, a healthy, reformed guy following a rather turbulent career to date. There are earlier tracks like ‘Star War’ and ‘Brand New Hate’, yet not the perennially popular ‘Bombed (Out of my Mind)’ which fuelled many of my more debauched teenage nights. Tracks like ‘Dysfunctional Professional’ and ‘Minus Celsius’ are new to me, but now it occurs to me that I don’t know actually much Babies material since 2001, so that’s not saying much! Poor effort on my part. Still, it holds up well next to “older” material. Strolling back on for an encore of ‘People Like People Like People Like Us’, following a brief guitar change, the Babies would have made for excellent headliners tonight – truly a dual-headlining show.

So by the time that the incredible opening riff of ‘Everlone’ breaks out across the Forum announcing the arrival of the Hearts, the pit is rowdy, drunk and primed for a good old sing-song. I caught The Wildhearts at Bloodstock last year – an outstanding last-minute replacement – so I know how on-form they are at the moment, and how joyous it is to see the original line-up back together. They look beaming, genuinely happy tonight, and with new material to prove it. Always the out-spoken and engaging frontman, Ginger tells us to “Talk to each other, look out for people in your community”, by way of announcing the title track from last year’s EP Diagnosis, about the breakdown of mental health services in the UK, which already sounds like a classic. In other imimitable Ginger quotes, ‘The Revolution Will Be Televised’ is apparently about “how people on-line think they know everything about politics, and about cunts in general”, while some stage-diving kerfuffle in the crowd somehow inspires a Brexit rant – “This is Brexit! Do what you want! Make your own rules! Elect a fat racist prick! Well, fuck it, here’s ‘Caffeine Bomb’…”.

Reprising the themes of ‘Revolution’ with ‘Let ‘em Go’ (“Let ‘em go! Let the shit-filled rivers flow! Let the wankers find their own”), from last year’s comeback album Renaissance Men, they bash through a set heavy on Earth vs material, with just ‘TV Tan’ from P.H.U.Q., probably in light of the fact they toured the album in full in the UK a few years back. The Hearts have such a wealth of quality material, much of which can only be found on obscure B-sides, compilations and live recordings, and it’s a testament to Ginger’s formidable song-writing skills that these obscurities, such as ‘Sick of Drugs’, can still become sing-along classics. By the end, they could play virtually anything from their 30-year career and still achieve the required crescendo; but there’s nothing quite like the ultra-catchy hit ‘I Wanna Go Where the People Go’ to truly cap it off. But we’re not letting them off that easily, as they stroll back on for ‘My Baby Is a Headfuck’ and ‘Love U ’til I Don’t’, and stick around for photo opps (an especially big cheer for Danny) and to shake some gleeful hands. Judging by the array of fans of all ages in the crowd tonight, The Wildhearts once again prove themselves to be the rock band of their generation and of many more to come.