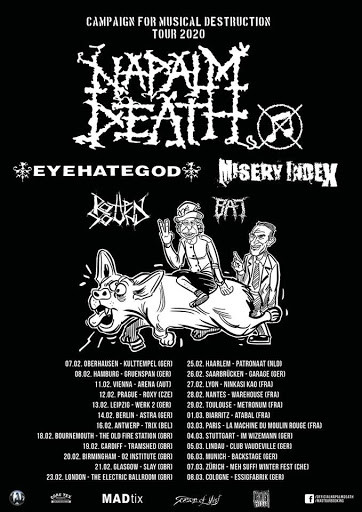 The original Campaign for Musical Destruction tour was the stuff of legend, to put it lightly. While the European leg had Napalm Death joined by the more-than-respectable Obituary and Dismember, the US dates teamed the grinders up with Carcass, Cathedral and Brutal Truth for what remains one of the most envy-inducing extreme line-ups of all time. Almost three decades later, the Campaign has returned and it’s fair to say that this one might be talked about with the same awe and whiplash-induced muscle-memory as its daddy.

Richmond, VA’s BAT are easily the least-known band on the bill, and given that they take stage at a time when much of tonight’s eventual crowd will just be finishing their shifts, they might have to remain a hidden gem for a while yet. That’s a bloody shame, as the power-trio celebrate metal’s excesses with skill, abandon and tongue lodged in cheek, delivering a half-hour of leather, ripping solos and song titles like ‘Wild Fever’, ‘Master of the Skies’ and ‘Cruel Discipline’, the last one presaged by bassist/vocalist Ryan Waste drawling, “This one’s about sexxxx!” With an emphasis on raggedy basslines and simple, fluid drumming, there are more than a few Motörhead comparisons that can be made for this lot; but between the seriously impressive solos (naturally accompanied with frequent gurning by Nick Poulos, who at one point uses his guitar to ‘machine gun’ a punter lodged on his phone), the quality of the songwriting and the overwhelming enthusiasm of everyone onstage, they’re definitely ones to watch out for.

It’s been a few years since Finland’s premier grind export Rotten Sound hit up Glasgow, so that might be why they feel like they’re making up for lost time and simply steamrolling over the room. It’s a set that expertly marries simplicity and complexity, the riffs focusing either on unsettling grooves that the full band can put their weight behind or brutal flurries that put Sami Latva’s frankly insane snarework first and foremost. He’s staggering to watch – his rapid-fire staccato beats never flagging by throwing one blink-and-you-miss-it fill in after another. ‘Targets’, still one of the classics of European grind, sends the room into a frenzy, and even if Keijo Niinimaa isn’t the most animated frontman of the night (Mr Greenway, take a bow) he strikes a balance between aggression and affability that fits Rotten Sound’s perversely catchy brutality like a glove. 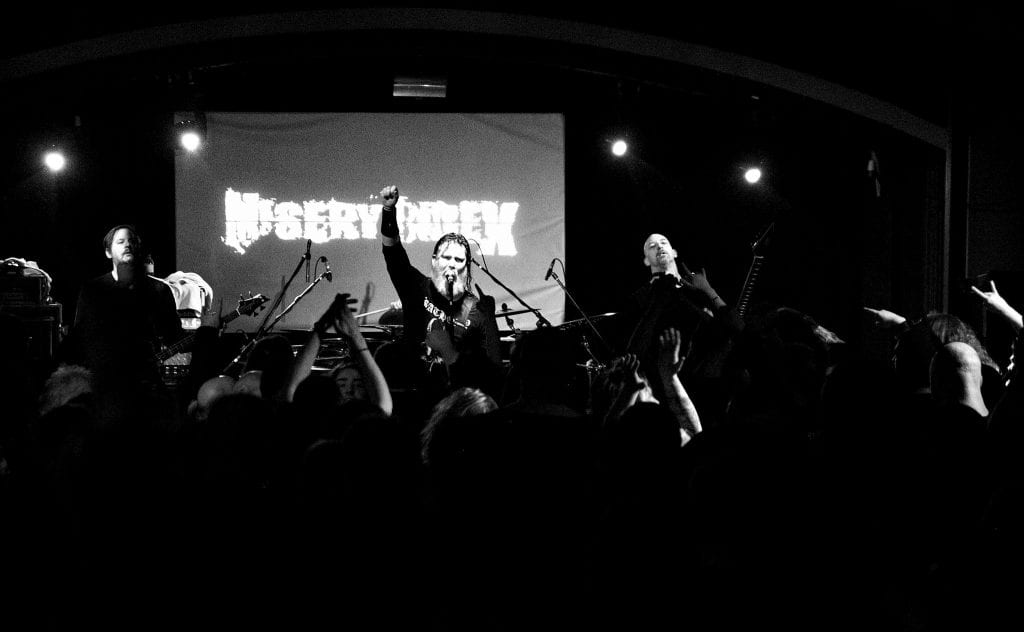 It takes something special for a band to be considered the ‘most metal’ on a night like tonight, but it’s hard to take that title away from Misery Index. From the moment ‘Embracing Extinction’ rears its rabid head, the room is moving like the floor is lava and only spontaneous acts of violence can save them. Though they haven’t been around quite as long as many of death metal’s heavyweights, their dedication to the craft is admirable; seesawing between gritty grind brutality and lengthy groovefests like ‘Hammering The Nails’, that rollicking riff and Jason Netherton’s rabid bark combining to dredge up a pit as unstoppable as a force of nature. ‘The Carrion Call’ delivers a spot of old-school, Bolt Thrower-worthy brutality, ‘Traitors’ is the same vicious kickback against ignorant imperialism that it always was (if not more so now) and ‘New Salem’, despite being a mere infant in terms of the band’s respectable back catalogue, is received with righteous callbacks and raised fists. They are, and always have been, a reliable proposition, but it’s only on stage that they can be appreciated for what they really are – true metal monsters.

It sure ain’t Eyehategod’s first rodeo, and it probably isn’t for 99% of the room tonight. They’re a band that have always attracted slavish devotion, and even when they take the stage to five minutes of searing, frazzled feedback, the crowds hangs on each note (or squeal, as the case may be). The tones gradually take shape and the four lurch into ‘Lack Of Almost Everything’, a less hairy but still formidable Jimmy Bower laying-down dopesick blues like only a true NOLA native can manage. Mike IX Williams is in as cantankerous a mood as ever, flicking phlegm at Bower and congratulating a birthday boy in the audience with an “I hope you fuckin’ die” and a grin, but it fits the belligerent mood of Sister Fucker I & II perfectly. 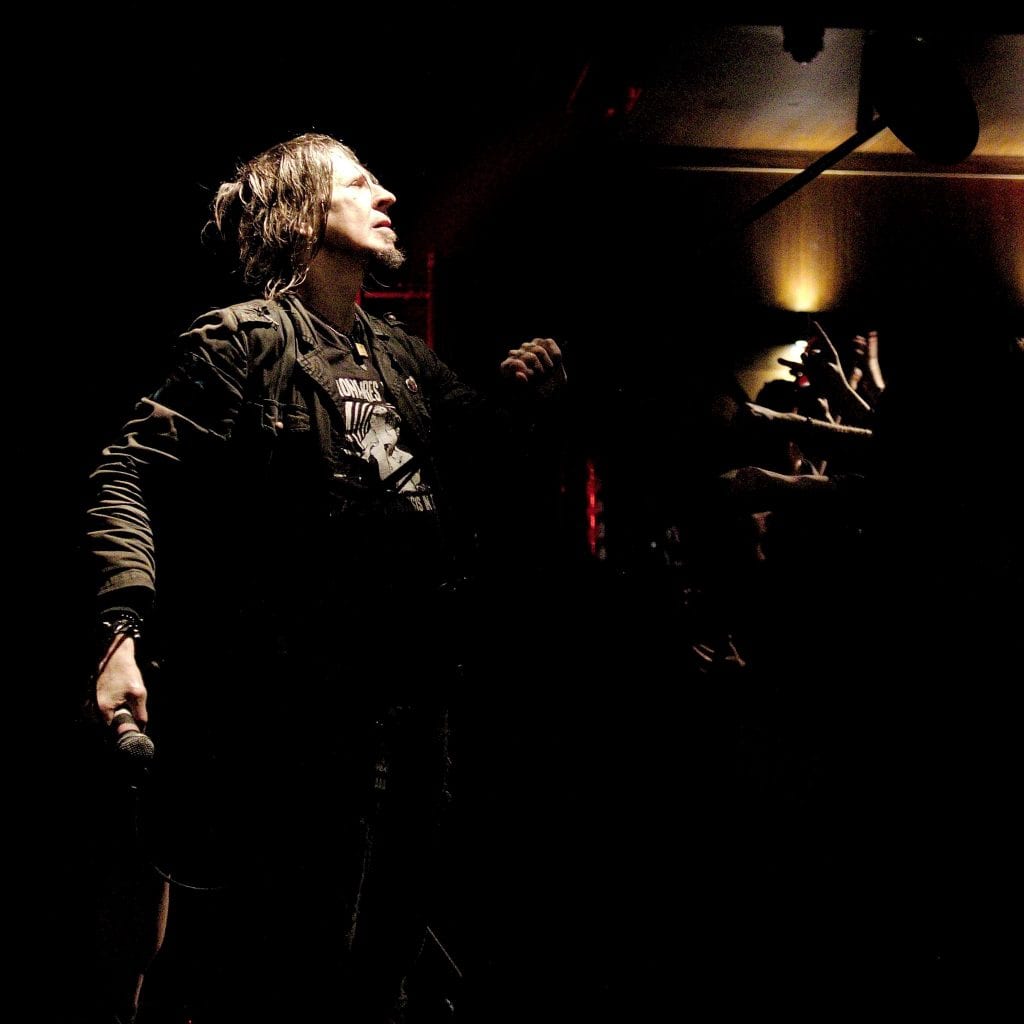 There’s a genuinely volatile charge to watching them rattle through their punked-up, stripped down blues, a subtle air of violence that weaves its way through the sometimes haphazard interplay of Gary Mader and Aaron Hill and is amplified tenfold when Williams is thrown into the mix. He staggers, shrieks and howls like his soul is on fire, and in a lot of ways he’s the ultimate hardcore frontman – pretence-free and utterly dominating. It makes Bower the perfect straight man in comparison, patient and seemingly bemused but still delivering a level of sonic weight that puts most tonight to shame.

It feels like it’s over before it’s begun but there’s still the crowning glory that is Napalm Death to come. Almost 30 years after their initial campaign of destruction, they bound back on to do it all over again, delivering ‘I Abstain’ with the accomplished fury of four blokes who never quite lost their edge. Barney Greenway is on fine form, sweating, barking and dancing (skanking?) his way through a set that covers the classics (‘Scum’, ’Social Sterility’, ‘Suffer The Children’), newbies (‘Logic Ravaged By Brute Force’) and the odd forgotten favourite (‘Mass Appeal Madness’) and attacking each of them with a manic energy that is only matched by the crowd’s violent exertions. 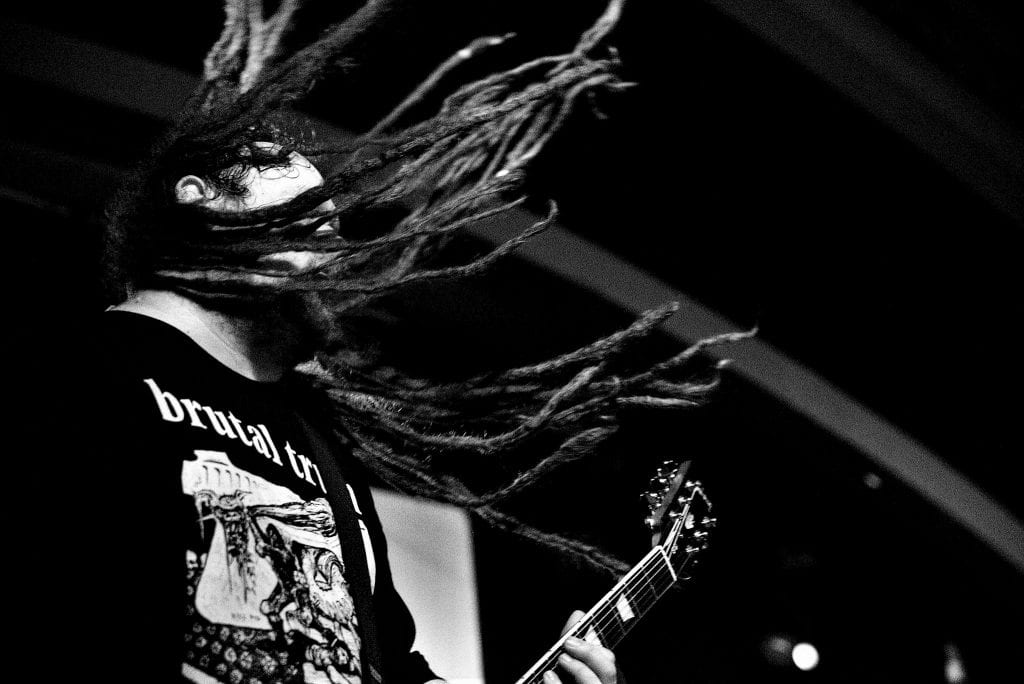 Time has honed Napalm Death into a tight ship – Shane Embury always seeming focused on the right tone, the perfect timing to match Mitch Harris and Danny Herrera’s impeccable synchronicity. The songs themselves might be pointed barbs, directed square into the face of the pricks and corrupt elite, but in Harris and Herrera’s capable hands there’s still a sense of fluidity, albeit one that you could easily be swept away in. For Greenway, fluidity always gives way to unpredictability as he bounds across the stage, grunting out ‘You Suffer’ like the world’s most violent cough, but remaining an affable presence between takes.

When it’s revealed that there are only two more songs to go, it’s already clear what’s coming. Well, sort of. Their take on Dead Kennedys’ ‘Nazi Punks Fuck Off’ is still an essential inclusion in more ways than one, but it’s a ragged rendition of Sonic Youth’s ‘White Kross’ that puts the perfect rusty nail in the night’s coffin. It’s a malformed wall of noise that bridges the gap between Embury’s skewed power and the squealing awkwardness of Thurston Moore, and it’s a weird and wonderful conclusion to a night of utter sonic devastation. 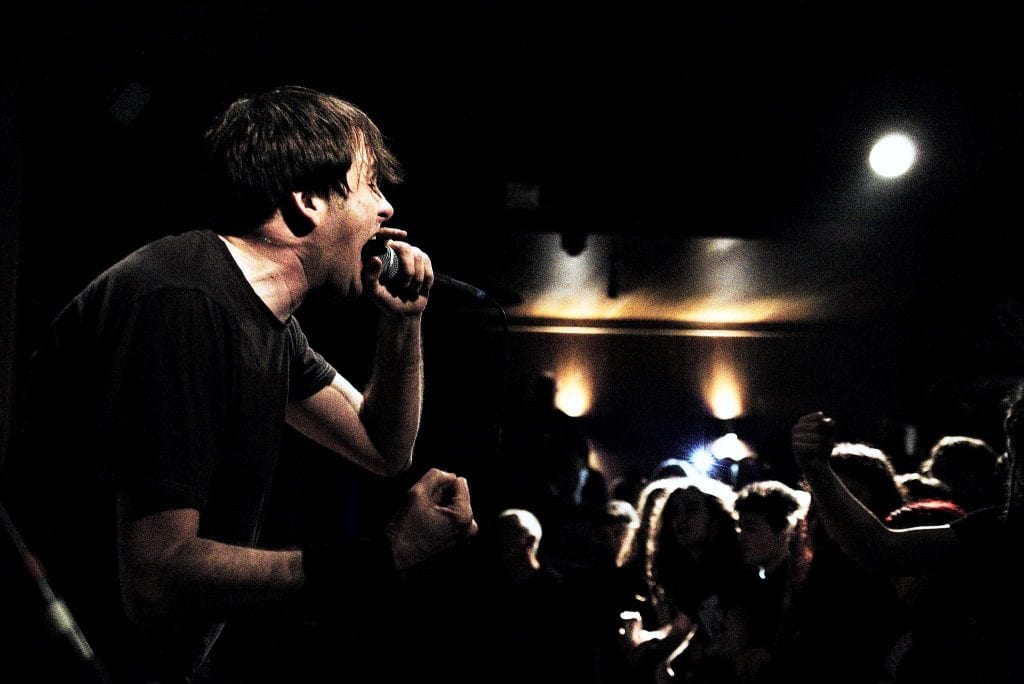