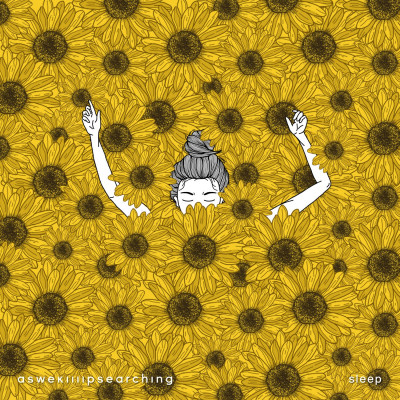 Every so often, I come across an album that deserves to be listened to with care. Not because it’s complex, or particularly avant-garde, but because it’s a quiet moment of meditative beauty. Such is the case with Sleep, the latest release from India’s premier post-rock outfit aswekeepsearching.

Last year’s Rooh was a phenomenal album, full of vitality and joy, and an argument could be made that Sleep simply represents the unreleased B-sides from the sessions for Rooh. This argument is woefully incorrect, and making that point does the album and the band a huge disservice. Sleep is more than simply repackaged cut-offs. It does work as a companion album to Rooh, but it’s also much more than that. As the band themselves explain on their Bandcamp, the seeds for Sleep were sown on their tour for Rooh, when they wanted to make music that might help them sleep. Within a month, the tracks had been crafted.

The eight tracks that emerged are mostly instrumental: minimalist, ambient, synth-driven songs, each a beautiful composition. Taken separately or as a whole, they may not put you to sleep, but they offer a chance for listeners to truly meditate, breathe in and out slowly, and allow a sense of calm to wash over them. The album is also the perfect length for a good mindfulness session, clocking in at just over half an hour long.

The album’s sense of calm is deftly established by the first two tracks, ‘Glued’ and ’11 Degrees.’ Both are pure synth tracks, played at a very relaxed tempo. The melodies almost seem to shimmer, especially on ’11 Degrees,’ and listening to them honestly feels like getting into a hot bath, or drinking a well-made cup of tea at the end of a long day. Elsewhere, guest-star Ajay Jayanthi contributes strings for several tracks, including the almost-lyrical ‘Let Us Try,’ which combines atmospheric synths with Jayanthi’s strings for a lush track that envelopes the listener like a warm blanket.

Even the tracks with vocals evoke these feelings. Depending on your personal mileage when it comes to how relaxing it might be listening to someone sing, you may find the singing distracting, but taken as a part of the whole, it works very well. The gentle vocal melody of ‘Dreams Are Real’ feels almost like a lullaby, and with the easy-going guitars, could certainly work as one. On top of this, some of the song’s motifs feel like a call-back to Rooh, which is always a good thing.

So why make an album like this? Beyond a glib “why not?” the answer is again listed on the album’s Bandcamp page: “This is us looking inward more than ever, for mental wellness and a safe space for our and our fans’ minds.” It is highly doubtful that the band intended to release this album during a global pandemic, yet the timing could not have been better. Plenty of us are putting on a brave face, but there’s no denying that the Covid-19 pandemic is going to leave lingering after-effects in the mental health of the world, just the same as any of the globally traumatic events of recent years. It’s not a cure – nor would they want it to be treated as such – but in offering listeners an album focussed on mental wellness at a time when it is in short supply, aswekeepsearching have done something just as important as any fundraiser for medical supplies. Meditation and mindfulness are not just useful tools to combat the current trauma – they can be used daily for any form of stress-relief, and aswekeepsearching have crafted an album to help with that.

In sum, this is an excellent album for these trying times, and for any time in which listeners feel in need of a break. It’s a half-hour meditation session wrapped in melodic synths and warm, comforting atmospheres. Now, if you’ll all excuse me, I’m off for a nap.