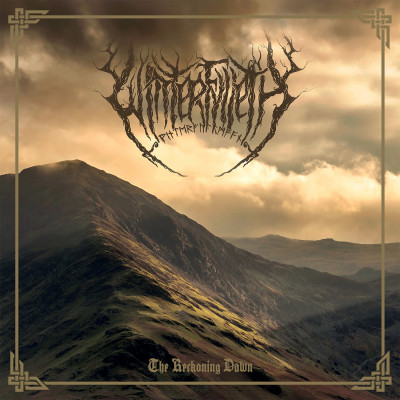 The Reckoning Dawn by Winterfylleth

Any metalhead with even a passing interest in black metal, especially in the UK, should know of Winterfylleth, and after the release of The Reckoning Dawn they will know a great deal more. The album hits the listener straight between the eyes on the first beat. ‘Misdeeds of Faith’ starts with a crashing riff and pummelling drums that don’t let up once for the whole track. The main vocals are reminiscent of the rasp of Enslaved’s Grutle Kjellson, but the chorus and backing vocals on this first track are a united male voice choir, with clean chanting that gives the song a mystic, historical feel, as if the inhabitants of the land were chanting down the centuries. Couple that with an album cover that features a brooding Lake District fell side in sepia-toned sunlight and here we have the complete package: Winterfylleth, the UK’s own black metal folklorists. Lyrical themes broadly cover English folk history, with tales of warriors, ancient kings and the people who work the soil. In the same way that Enslaved’s sound and lyrics are steeped in Norse heritage and folklore, Winterfylleth hold the British Isles in the same reverence.

‘The Hostile Fate’ continues with another finely crafted piece of BM. There is nuance to the songwriting, with interludes and solos that break up the furious paced riffing. ‘Absolved in Fire’ has a long intro, a lamenting acoustic instrumental with strings that is full of sorrow. This is Winterfylleth’s first full metal album since 2014, but in the interim they released an acoustic folk album, The Hallowing of Heirdom. That vibe, used here, sits very well with the metal, and ‘Absolved in Fire’ develops into a full blast, with some very fine melodies woven into the heaviness, and some splendid rhythm work and almost Maiden-esque galloping riffs. It’s the balance of heaviness, melody, pace and aggression that make The Reckoning Dawn such a finely crafted album.

There is so much bog-standard black metal around, and even once you’ve broken down the subgenres, a lot of the mediocre variants boil down to mono-paced, 100-mile-an-hour riffing, tremolo guitars and harsh vocals. It can be entertaining for a track or two, but invariably dull/repetitive/mind-numbing for a whole album. To use that formula and create a classic, a listenable and interesting metal album that holds the interest for the best part of an hour is a true skill. This is why The Reckoning Dawn is essential listening, because these guys show the others how it’s done. Winterfylleth: English heritage metal. When we’re stuck indoors and can’t escape to the hills, immerse yourself in these tales of the ancient land.