(((O))) Review: The Doomed Bird of Providence – Rumbling Clouds of War Hover over Us 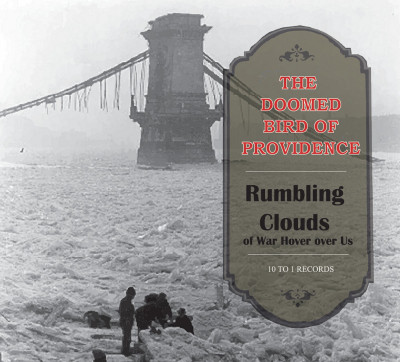 The Doomed Bird of Providence’s previous endeavours concern themselves with journeys – not just the physical aspect, but the emotional upheaval, trial and tribulation that such travel and transportation bring with them. The London-based folk orchestra that Australian Mark Kluzek has formed around him usually ply their trade against the background of the early colonisation of Kluzek’s home country, but here is a journey more recent and more personal but remaining as painful as their earlier work.

The Rumbling Clouds of War Hover Over Us concerns the journey of one Wladyslaw Kluzek (Mark’s grandfather) as he flees internment from occupied Poland in 1939, coming under the command of France and Britain’s military rule as he moved through Europe hoping to find respite from the horrors behind him at every step. As with predecessor Burrowed into the Soft Sky, this is a story told without words but unlike before, this is accompanied by a series of animations charting Wladyslaw’s journey across the EP’s four tracks, helping to add context to the mood of the record and showing just how far he had to travel in order to feel safe.

The self-titled opening track begins sweetly enough as Kluzek leaves home to enlist in the army, a familiar, familial hymn becoming subtly distant and downbeat yet with bright, note-long glimmers to both pierce and accentuate the clouds of war above. After that, the overall feeling is that of loneliness and displacement during the two middle tracks before final piece, ‘But Something to Aim For’ provides a determined drive towards the prize – in Wladyslaw Kluzek’s case, finding love in Scotland and ultimately life in Australia.

As Mark himself says, this tale of his grandfather is not an unusual story of the time, but this nonetheless is a story which needs to be preserved and passed down so that looking back at such a time isn’t relegated to strange reimagining of what the Second World War meant to those within it and how it affected everyone, especially now when that period of time is beginning to fade from our collective living memory and remembrance becomes more celebration than reflection. It also continues The Doomed Bird of Providence’s overarching philosophy of looking at Australian culture by looking at a new wave of immigration that didn’t solely involve colonialism or transportation.

This is a mostly stark and lonely collection of music that portrays a time spent just trying to be safe and it works so well in this context, as well as being a captivating and engrossing work in its own right. These are difficult times, and at first glance it may well feel a bit strange to want to take in a lonely series of instrumentals documenting an incredibly dark period of history. But there is light in here also, and what The Doomed Bird of Providence does so well is never forget the people in their stories, and it’s these expressions of humanity within the horror that makes Rumbling Clouds… such a precious thing. It sits perfectly in the smallest theatres in which we all now occupy and gives us all pause to appreciate the points of light it offers and the promise of a tale which is never truly over.

All proceeds to go to MÉDECINS SANS FRONTIÈRES.