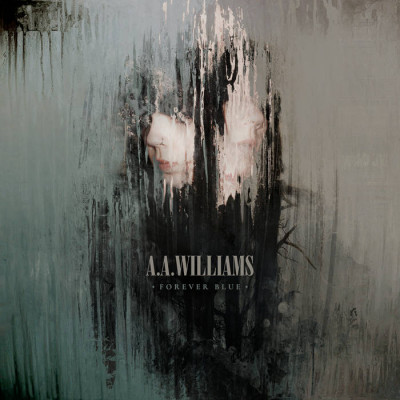 Forever Blue by A A Williams

It is barely over a year since multi-instrumentalist A.A. Williams released her self-titled E.P, played her first concert in April 2019, and later-on released a fabulous collaboration ‘Exit in Darkness’ with Japanese drone specialists Mono. Fast forward to the beginning of 2020 and Williams played her first headline show at a sold-out London’s South Bank Purcell Rooms. A show of extraordinary mesmerising beautiful music that also turned out be my last gig before the Pandemic lockdown. Now comes A.A. Williams debut album Forever Blue, and the introduction of a uniquely talented artist is now complete. Forever Blue does not disappoint.

Having had music lessons from the age of six and immersed in classical music, it wasn’t until her mid-teens A.A. Williams discovered the thrills of the Deftones and the connection heavy music can bring. On Forever Blue the classical influence can be heard and while it doesn’t have the brutality of the Deftones, her music does have an alluring sonic depth and darkness to it, which has seen her accepted and appreciated by sections of the Metal press as well as the more traditional high-brow music publications.

Forever Blue is full of quiet aching beauty juxtaposed with sweeping lushly layered textures of awe-dropping soundscapes. While the familiar quiet/loud structure employed in her songs is used magnificently for dramatic effect. Never ever sounding forced, but incredibly natural in its implementation and widescreen scope. It is remarkable to find out it was largely recorded at home with Williams playing guitar, cello, piano, and vocals and husband Thomas Williams on bass. This left drummer Geoff Holroyd to record his parts at engineer Adrian Hall’s South London studio.

It all gets under way with the achingly mournful ‘All I Asked For(Was To End It All) – initial delicate sparse piano before the lush layers of cello, guitar, and drums circulate. A song of such weightlessness and stunning song-craft. Then it is nearly bettered by ‘Melt’, Williams whispered vocals then ascend to an elevating delivery matched by an enormous electrifying cinematic esque widescreen drama. This is just the start of eight totally riveting songs – the breath-taking ‘Love And Pain’, the delicately intimate ‘Dirt’ sung with former Wild Beast Tom Fleming – makes for a complete album of finely balanced  waves of swooping melancholy.

Williams airy, measured vocals also possess a raw, cracked reality, which packs a hefty emotional punch amid the lyrical themes of love, loss and the anxieties they can both bring looms large, which occasionally threatens to crush you. Her vocals are so magnetic that you would not think guest vocalists would be needed. But the decision to include a few collaborations – Cult of Luna’s Johannes Persson and Fredrik Kihlberg plus former Wild Beasts Tom Fleming – are inspired ones, especially when they are applied with stunning effect as on the melodic but heavy ‘Fearless.’ The juxtaposition of Williams soft croon with Johannes Persson’s deep guttural growls superbly recalls Amenra into a compact five minutes, is enormously memorable and satisfying.

To really appreciate Forever Blue at maximum aural level is to take time out and bask in its entirety from start to finish, ideally in a darkened room, stereo turned up or headphones applied for a full immersive effect. It’s an emotional listen, for sure, an inward personal listening experience. If you’re a fan of Amenra, Chelsea Wolfe, Wild Beasts, Mono, Cult of Luna, Mogwai, Nick Cave etc, then this requires your full attention.

Forever Blue is a stunning piece of work. Yes, you do have to be in the right mood to listen to it, but isn’t that the case with most, if not all music. It has a transformative power that grows deeper and rewarding the more time you spend with it. Its roughly half way through the year and I sense strongly this will be right up there challenging for my album of the year.