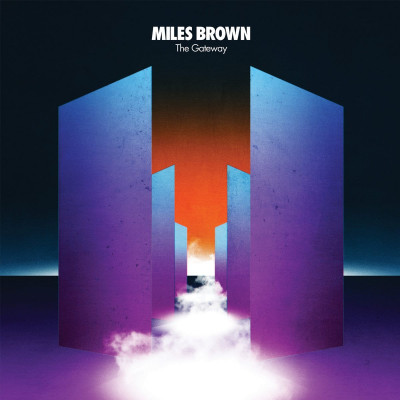 The Gateway by Miles Brown

Before we begin in earnest, many happy returns to the Theremin, 100 years old this October (should we get that far). An instrument seemingly invented by accident (as all the best things are), it’s something that has been in the music-listeners’ collective consciousness for a good two-thirds of its lifetime, largely thanks to its use in film and television soundtracks fueling black & white sci-fi and horror imaginations around the world from Bernard Hermann’s score for ‘The Day the Earth Stood Still’ and beyond.

On the one hand, it’s perhaps a shame that such a versatile instrument can sometimes feel a bit marginalised in this oft-schlocky niche, but when people really get to grips with it, it can soar. Australian Miles Brown has been putting his own musical expertise with this instrument to good use with electro-prog synth band The Night Terrors as well as on Séance Fiction, an excellent solo debut album. This is now followed by The Gateway, a record which continues his quest to expand the Theremin’s remit whilst also delightfully embracing the bits that captivated us all in the first place about it.

Whenever anyone does anyone a bit ‘80s with a synthesiser these days, John Carpenter’s name pops up – sometimes fairly, sometimes less so. With The Gateway, this connection is embraced from the get-go, with the noble-gaslit and dry ice cover artwork (anti-)cheerfully announcing its arrival, backed with a set of track titles that further place this in a very specific headspace. Musically, the connection here is more spiritual than direct, the sense of synthy dread produced by Messrs. Carpenter and Howarth complemented by something that is more playful with its atmosphere.

This is a vocal-less affair which is a bit of a shame in some respects as Brown’s voice was just as integral to Séance Fiction’s sepulchral vibe as his instrumentation. It does feel like a good move for The Gateway though, marking this new collection as something altogether different to its predecessor. The instrumental approach also allows his Theremin to provide more of a textural centre. The love of a good pun is well evident here also, Side 1 especially embracing the demonic workout/montage feel with track titles such as ‘Exorcise Routine’ and the glorious ‘Summon Chanted Evening’ gleefully bridging the neon and the otherworldly to provide something unique and – yes – fun contained in this 45 minutes of electronic genre-hacking.

Those of a certain vintage or with a hankering for the days when electronica was more experimental and, well, slightly glum will find much joy to unearth here. ‘Speaking in Tongues’ contains the briefest callback to A Flock of Seagulls’ ‘Wishing’, whereas the driving ‘Shudder Speed’ goes full-on Airwolf with its percussive stomp of a track. At its heart, it does the epithet “Gothic Sci-Fi Techno” a proud and accurate service, producing an album which manages to be both bright and dark at the same time. Miles’ prog history isn’t forgotten either, with much of Side 2 (especially the manic ‘Phantasma’) somewhat evoking his Night Terrors work in terms of complexity as well as an urgency placed on the listener to keep turning the volume up on it.

This is something which is a tricky thing to sell to passers-by, as the central instrument (performed as expertly as always, it should be noted) is something that doesn’t tend to get people flocking to listen. I would urge everyone to give this a go however; the Theremin here is an integral part of The Gateway and never feels that it shouldn’t be there. In fact, it would be weird if it wasn’t. That alone is one of the mind-expanding properties of this record, and Miles Brown’s musical output as a whole. This has become a fast favourite of mine and hopefully many other people as well, especially those who never knew that this sort of thing was ever a thing to begin with.