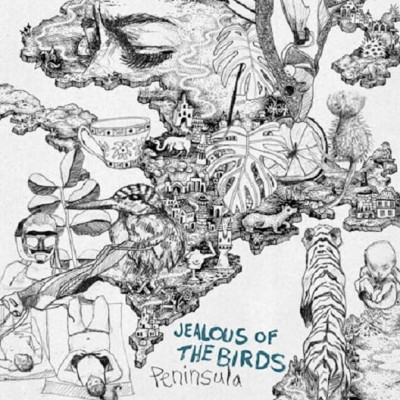 Peninsula by Jealous of the Birds

Jealous of the Birds is the musical project of Belfast-based singer-songwriter Naomi Hamilton. Peninsula is Naomi’s second album and this could and should be the start of greater things. Remarkably, Naomi was born in my hometown Portadown, yet shamefully, I’ve only came to notice her in the last few months. With a record deal with Atlantic Records, someone isn’t doing their job right! Since 2015, Naomi has released her debut album Parma Violets and two e.ps 2018’s The Moths of What I Want Will Eat Me in My Sleep and 2019’s Wisdom Teeth. Peninsula was recorded with such luminaries as David Wrench (The XX and David Byrne) and Marta Salogni (Björk, Anna Meredith, Georgia Ruth) and the production throughout is first class. The song writing happens to be of a similar quality.

It was lead single ‘Young Neanderthal’ that grabbed my attention when I first heard it, an earworm verse slips into a fuzzed up punk pop chorus, reminding me a lot of Mitski. The song is total red herring though as there isn’t anything else like it on the album. What it does have in common with the other tracks is a sublime way with melody. ‘Something Holy’ has that intricate intelligent pop tone that Neil Hannon used to produce and a killer chorus draped in glorious instrumentation with layers of melodies bouncing off each other. The confident ‘Shiloh Chandra’ is a glorious song that once again glides along with an easy verse that leads up to a chorus (of sorts) consisting solely of an elongated “aaaaah”, but it’s magnificent.

On ‘Hadron Collider’ Naomi gets scientific with some spaced out sounds reminiscent of TV on the Radio. The bass throbs as the power pop verse skanks and shakes with a majestic groove, before erupting into an absolute belter of a chorus. The song is just begging to be given some sort of break to get heard by the masses. The sumptuous instrumentation of ‘Kodachrome’ takes us back a few decades to the chamber pop sounds of the late 60s but this time there’s a switch up as the chorus is the simpler of the melodies. The production here is sumptuous and I’m struggling to grasp that this is an artist from my home town and country, how can this be?

One of many highlights, ‘Haze of the Hill’ features delicately plucked acoustic guitar and suave strings as Naomi tenderly sings an elegant and beautiful song of hope, this is truly remarkable music and I’m utterly enthralled. On ‘Pendulum’, snappy beats and a jumpy bass underpin another pristine pop song with a delightful chorus that is sophisticated and extremely satisfying, it rolls over you like velvet. The exquisitely named ‘Pulaski Skyway’ has a summery breeze of a chorus with that is pure elegance. Naomi’s voice rises and falls with consummate ease and you really get to appreciate that when she soars her voice is a thing of beauty.

On ‘To The Rind’, the jazzy verse shimmers while the chorus swaggers with a brash confidence. The scuzzy guitar solo points to early PJ Harvey and you wonder how this would sound live in a sweaty club. By contrast, imagine a market square in a tranquil French town, people sitting at outdoor tables sipping coffee, sunshine and happiness. ‘Always Going’ is the soundtrack to the scene. Life is good. The gentle ‘Epistle’ could easily have appeared on Taylor Swift’s Folklore album. A haunting and tender acoustic ballad that flitters and floats with a chorus that will break your heart. A fine way to close out the album.

Once again, I need to reiterate my sincere shame at not having already heard Jealous of the Birds. Naomi Hamilton is an amazing talent and my word, the music being produced by Northern Irish artists has progressed remarkably. Peninsula is a quality collection of smart, well written songs crossing multiple genres, imbued with fine melodies from start to finish. One to watch!