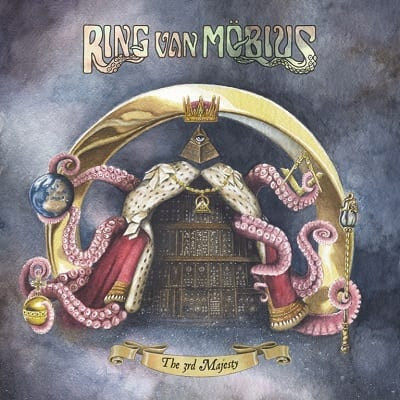 It’s been two years since Ring Van Möbius have released a new album after the release of their grand-slamming debut in 2018, Past the Evening Sun. The trio describe themselves as “prog rock straight from 1971, but made today.” But holy shit in a fucking handbag and Jesus on a motherfucking cross! These guys can really fucking play like there’s no motherfucking tomorrow! Keyboardist and vocalist Thor Erik Helgesen, bassist Havard Rasmussen, and drummer Dag Olav Husas, have taken the prog torch by keeping the fires burning brighter than ever!

That and their second album released on the Apollon label entitled, The 3rd Majesty, showcases the band have burst through the floodgates even more by ascending more tidal waves to destroy an entire town. It is quite an intensive release this year that the Norway trio have unleashed to raise some more hell. And in the words of Bette Davis from the 1950 classic All About Eve, “Fasten your seatbelts it’s going to be a bumpy ride.”

Line Sverdheim’s artwork is quite startling that pays tribute to Robert Moog, H.P. Lovecraft, and the late great Keith Emerson. And the art designs of Paul Whitehead whose best known for the album’s artwork for Genesis, Van Der Graaf Generator, Le Orme, and High Tide’s Sea Shanties. It shows that she is honoring Paul’s designs to keep his ideas and work going as far as she can go.

Now onto the music. I wouldn’t compare it to ELP, but I can hear some of the influences between the obscure and the Italian prog masters from; Arzachel (Pre-Egg), Marsupiliami, Latte E Miele, Metamorfosi, Osmosis, and Arthur Brown’s Kingdom Come. The 3rd Majesty is quite the thrill ride to embark on.

Clocking in at 22 minutes and 06 seconds, the opening suite ‘The Seven Movements of the Third Majesty’ have this fanfare introduction between the gong and the Hammond organ while the Moog follows in a melodic sequences before going into this nightmarish havoc as the organ ascends into this toccata riff. You can imagine yourself being inside the kingdom with a Lovecraftian atmosphere as we rise for the imperial majesty to take its throne. The midsection dives into this crossover between Egg and Triumvirat that is fucking bat-shit crazy! And Thor tackles some insane textures on the keyboards.

The moody sequence calms everything down as we see what the king has in store for the townsfolk. And it isn’t going to be pretty while Havard’s booming bass goes up with Thor’s synths at the same time. They also travel towards the rock progressivo Italiano sections that chills you up as Thor’s vocals cries up to the gods to reveal the evening sun once more. The downfall starts as all hell starts to break loose as we enter in the kingdom for the rioters and protesters to take down the third majesty once and for all as he has gone completely mad with paranoia and delusional insanity as the music increases the heat levels for the listener to see the bloody aftermath on what has happened.

With its organ-bass melodic riff intro and time-changing textures, ‘Illuminati’ is a ball. You can hear the Moog and clavinet rising out of the ashes to walk into the towns of Gentle Giant thanks to Thor’s angelic vocals resembling Kerry Minnear. The first two minutes of ‘Distant Sphere’, starts off with a classical string section that is almost recorded inside a gothic cathedral with a chamber-sque background as it gives the trio to beyond the Prog genre. Thor is very much like the new captain of the Millennium Falcon as they make the jump to light-speed into our solar system.

The Rhodes has this booming loop before the xylophones transport into this marching segment that takes us into a stop-and-go momentum as Havard lands a full-scale assault by attacking the town as they travel back into space with some Canterbury grooves beyond space and time. Closer, ‘The Möbius Ring’ sees Havard revving up his motorcycle to get the picking bass geared up and ready to go. Dag and Thor follow him in hot pursuit as the epilogue sees a new king in a flash-forward sequence where everything is going to be okay after the damage of what the third majesty has done. But this time, the new king who has taken over the throne, will do things properly and clean up the mess that the previous one has left behind.

The 3rd Majesty is one hell of a ride that Ring Van Möbius have brought in store for 2020. They aren’t fooling around this time as they have unleashed the targets with heavy machine gun fire that as I’ve mentioned before to raise hell by kicking some motherfucking ass with their second album. Now if only South Park would use their music to destroy Mickey Mouse in the new season, I would be a happy camper.