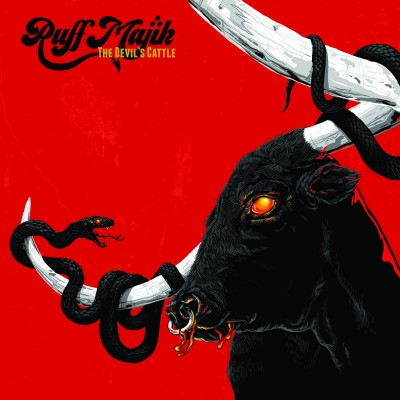 The Devil's Cattle by Ruff Majik

Ruff Majik are a five piece from South Africa, describing themselves as playing “rot & roll”, who coalesce around songwriter, vocalist and multi-instrumentalist Johni Holiday. Evert Snyman was the only other ever-present in the studio for this album: providing guitar, bass, vocals, drums and percussion, as well as leading on mixing duties. The band have filled back out to a proper touring five piece since, and the impression you get now, especially from watching the videos they have released for tunes off The Devil’s Cattle is of a gang of badass ne’er-do-wells. It’s a finely crafted, cartoonish image that calls to mind Songs For the Deaf era Queens of the Stone Age – and the comparisons don’t stop there. The Devil’s Cattle is a hard driving, but fairly diverse set of songs, tied together by samples, similar to Josh Homme’s stoner epic, although there is no overriding concept here, just an air of nastiness and dysfunction.

Whilst ostensibly falling into the stoner rock sub genre, Ruff Majik set themselves apart from the pack due to their eccentricity and Johni Holiday’s, unusual, often maniacal vocals. Operating in a higher register than most of stoner rocks’ drawling archetypes, Holiday sounds like a black metal vocalist who’s been forced out of his coffin and dragged into a dusty, roadside border town bar to drink tequila until he lightens up enough to dance on the tables.

Several of the tunes, like the infectious ‘Jolly Rodger’ and the slinky ‘Lead Pills And Thrills’ do stick very closely to the QOTSA template but don’t suffer in comparison and always have enough of Ruff Majik’s own twisted personality to pull them off. ‘Swine Tooth Grin’, another pounding stoner fuzz monster is a prime example of the band’s singular strengths. It opens with Snyman’s deeper vocals and a hip-shaking groove, akin to Patron, before Holiday switches to an Axl Rose-style wail and the band churn out huge doomy riffs. No one else sounds like this.

Occasionally all these crazy magpie mash-ups don’t entirely work, however, and towards the end of the album things take an unexpectedly hard left turn, with the band ending up in a weird ditch. Both ‘Born To Be Bile’, which features vocals by Dopethrone’s Vincent Houde, and the closing ‘Hymn No.5’ venture into hardcore, sludgy doom territory – not merely flirting with it, but going in wholeheartedly. Now, I’m all for musical experimentation and it’s not like the songs are bad – ‘Born To Be Bile’ is winningly unpleasant, but I just don’t think the tunes sit particularly well on the album, especially when these tunes are both tucked away at the end. These songs seem like a sudden change of mind, undermining what’s come before and causing the album to lose focus and cohesion. I suspect if the sludgier numbers had been placed more centrally in the track listing then I wouldn’t be making such a deal of it. There’s a great goat sample on the closing ‘Hymn No.5’ though (!!), and fans of Electric Wizard will certainly enjoy Ruff Majik’s darker moments.

Keith Richards once allegedly said of Mick Jagger that he was a lovely couple of blokes, and the same applies here: With The Devils’s Cattle Ruff Majik have made a great couple of albums. You may consider yourself lucky that it’s buy one get one free.