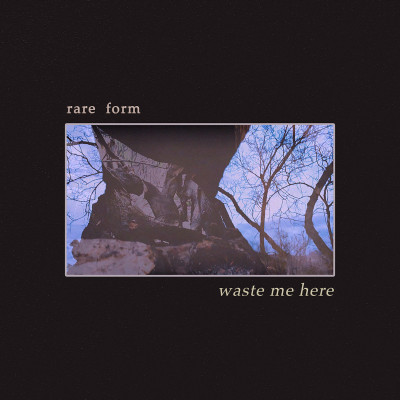 Waste Me Here by Rare Form

When I reviewed a previous album by California’s Rare Form on this website, Six Months In Hiding, I said that it was akin to watching a horror movie on Netflix, that the tracks told a story, drawing the listener in, and that the story was occasionally as scary as hell.

Wind forward two years and here we have Rare Form’s final outing, Waste Me Here. And, I have to say, their music still manages to send shivers up my spine. The opening strains of first track ‘Tunnel View’ have an extremely creepy, insidious melody, one that hints at creeping terror. Underpinned by moody low-end strings, it’s hard not to imagine some shambling nightmare inching its way towards you in the darkness, one of George A. Romero’s zombies perhaps, or something unspeakable from an H.P. Lovecraft tale. The build-up of dread and tension is paid out in a careful way. Throughout the album there are passages of glowering intensity which are released periodically through use of lighter melody, as on ‘Tunnel View’.

Rare Form’s music is part dark ambient, part chamber music. Previous collaborations, such as with Mourning Rituals, have shown a range of styles, with more free-form, improvised and lighter ambient music. Check out their discography on Bandcamp: there’s a lot to be explored and to discover from the past few years. Waste Me Here sticks to the left-hand path trodden by Six Months In Hiding, and the swelling dirge of ‘All Night’ drives this home. Thyme Nord’s hazy vocal at the start echoes around some far-off sax and swirling atmospherics. The song is held together by guitar riffs, deep and slow, rising to a fragile melody. The ‘chamber’ side of Rare Form comes to the fore in the latter part of the track, along with an experimental approach, and a droning cacophony of different musical voices.

The gloomy vibe is built on monumentally in third track ‘Going Up’, where the strummed chords get longer, deeper and more menacing. The whole thing reminded me resoundingly of Sunn O))), who can hold a note and make it work and reverberate for many long seconds. The whole track has an aura of intense foreboding, making listening via headphones a moving experience.

When I asked why this was going to be Rare Form’s last album guitarist, spokesperson and RF main man Ryan Beitler simply said “It’s just time to move on.” That being the case I can think of no better track to finish their final outing than ‘A Light in Space’. The deep, throbbing drone of this track reverberates through your brain and continues far beyond its all-too-short 6 minutes and 33 seconds. It’s a repeated bass refrain of perhaps 11 notes that just loops, steeped in massive reverb and swirling ambient textures. Every time I play this track I have to play it again immediately afterwards. It’s a shame the song is so short, but it provides a very fitting end to this intense album.

Rare Form’s short career has been characterised by an experimental and open-minded approach to creating some of the darkest and most interesting ambient music I’ve heard. Their crossing over into drone metal on one or two outings, such as this one, adds to the menace, and makes it some of the heaviest ambient music I’ve heard too. If a trip to the dark side appeals to you, check out Waste Me Here.