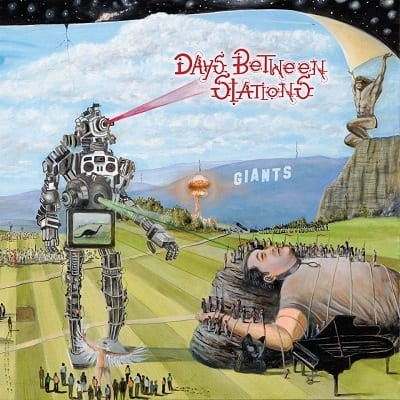 Giants by Days Between Stations

Taken their name from the 1985 novel by Steve Erickson, Days Between Stations have been around for 17 years by Sepand Samzadeh and Oscar Fuentes-Bills. With the sounds of progressive, classical, post-rock, and post-punk in their arrangements, they have released two studio albums from 2007 to 2013 (sole self-titled debut and In Extremis).

That and their third studio album, Giants, sees Sepand and Oscar going into a cinematic virtue that they and producer Billy Sherwood tackle into. And with help from Durga McBroom (Pink Floyd), Inid Abiza, and XTC’s Colin Moulding, Days Between Stations aren’t just a band, but more like a family that have brought Giants to life.

‘Goes by Gravity’ is sort of a return to The Dukes of Stratosphear period with a psychedelic twist that Colin brings a lot of that late ‘60s era for Days Between Stations to bring out the Mellotron’s, clean guitar sounds, and dreamy beatle-sque approach to give their stamp of approval for Andy Partridge. The 16-minute suite ‘Spark’ sees the band going into the dream-like memories that we had years ago.

With a fanfare introduction, blaring organ and bass exercises, you can tell that the duo have done their homework with some approaches between the guitar chops of the Mars Volta and the Il Balletto di Bronzo sound, followed by the lyrical structures of a sci-fi dystopian landscape with an acoustic/moog Italian voyage. ‘Another Day’ has this ‘80s new wave feel with heavier bass lines along with a Steampunk synth opener that dives into the vibes of a crossover event of Tears for Fears meets David Bowie with Giorgio Moroder handling the production.

‘Witness the End of the World’ gives Durga a chance to set up the details on what has happened in the aftermath of the apocalypse. With classical strings, a minor structure of the piano melody, the swirling guitars goes into this waltz midsection as the 12-minute title-track walks into the opening structure of Phillip Glass’ score of the 1998 film, The Truman Show.

It is an eerie texture of dealing with the how the world that it once was in its heyday, is now turned into this horrible nightmare of the Ayn Rand scenario that she was once described between The Fountainhead, Anthem, and Atlas Shrugged. Heavier bass parts reflects the memories with its mournful piano sections, followed by a hay-wiring effect of the guitar and synths that becomes a rising sea section as it opens up for a brand new day.

Giants took me a while to get into their music. While I’m not big on Days Between Stations, it is a not so bad, but pretty good album this year. It can take a while and many listens to see what the duo has embarked on. This was a real challenge for me, but Giants is a bumpy roller-coaster ride that tends to be exhausting, it pulls through at the very end.