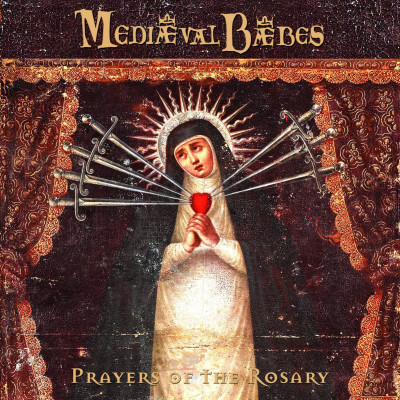 Prayers of the Rosary by Mediæval Bæbes

Despite giving up my ties to the Church of England nearly ten years ago, religious art, and in particular religious music, has always held an interest for me. Unfortunately, regardless of denomination, most of the music for a church service is dreary and boring. But if I’d attended services as soundtracked by Mediæval Bæbes, I might still be a believer (or at least more willing to attend church). Their tenth studio album Prayers of the Rosary is, to put not too fine a point on it, a truly religious experience.

I won’t try to comment on the beliefs of the musicians and singers who created Prayers of the Rosary, but from the very beginning, the music is truly reverential. The subject matter of the album is given a greatly respectful treatment. From the quiet, delicate, and considered opening notes of ‘Rosario’, which in turn opens the album, the listener is truly entranced for the duration. It really does feel as though if not the presence of God Himself, then at least the presence of something supernatural is at work cross the album. Whatever it is, it is spectacular.

But it’s not just the careful treatment of the subject matter that makes this album unique from the rest of their discography. Prayers of the Rosary is the first Mediæval Bæbes album to feature entirely original compositions. The six main singers – Katharine Blake, Fiona Fey, Marie Findley, Sophia Halberstam, Anna Pool, and Josephine Ravenheart – are accompanied by field recordings taken from important spiritual sites along St Michael’s ley line including Avebury stone circle and Glastonbury’s Chalice Well (legendary resting place of the Holy Grail). These are delicately woven into the music composed by Blake, mainstay of the group since its inception, in collaboration with multi-instrumentalists Charlie Cawood and Michael J York. Cawood and York’s talents are on fine display on instruments like bagpipes, hurdy-gurdy, the lyre, the oud, Chinese pipa (also known as the Chinese lute), and tanpura. Guest contributors include Kavus Torabi, founder of Knifeworld of which Cawood is still a member, on Indian harmonium, and previous guest singer Giles Davies whose bass-baritone voice is proudly displayed on ‘Fatima Prayer.’ The recordings for the songs themselves were undertaken at Heath Street Baptist Church in Hampstead, the acoustics of which are fantastic. There’s just enough echo to give the vocals – magical as they always have been – a truly ethereal air.

The lyrics on the album are taken from the words of the Prayers of the Rosary, a set of devotional prayers to the Virgin Mary. But they are sung in a style known as “plainsong.” This musical style is usually monophonic and unaccompanied, and was mostly used in liturgical worship practices in the early Christian church up to the 9th Century. Or, to put it in less technical terms, this album takes its vocal style from a kind of church singing used from the early days of Christianity into the early half of what historians call the Middle Ages or Medieval Period. So, it’s a particularly appropriate experiment for the Mediæval Bæbes. But their twist on plainsong is the addition of the musical accompaniment, which feels distinctly psychedelic in nature, thanks to the influence of Cawood and co. The whole effect feels a little bit like an acid trip through the collective unconscious of rural Britain: the listening environment might be real and tangible, but the reality to which the music transports the listener is a sacred ephemera, suffused with pagan magic and Christian myth.

Nothing on the album feels overdone or overwrought, nor does anything feel half-finished. In keeping with the religious theme, every track is well-paced and given its proper due. I can easily picture a choirmaster leading an actual church choir through each song while the musicians play. Not once do the instrumental lines or field recordings distract the listener, or do a disservice to the vocals – everything is perfectly balanced. Perhaps the only issue is that even at a 50-minute runtime, the album still feels like it’s over too soon. It’s certainly one that’s worth taking in with headphones in a quiet room. It invites the listener to pick over the details that might otherwise be missed – the little trill of handbells here, or the soft twittering of birds there – and meditate. Or, if you wish, to pray.

It might not make a believer of an atheist (or of this agnostic writer), but Prayers of the Rosary is an excellent showcase for the beauty of religious art and music. For an album of entirely original compositions, all the tracks are exceptionally well-crafted. The instrumental melodies and field recordings greatly serve the vocals, themselves a magical, ethereal presence. A truly religious experience, it stands unique in the discography of the Mediæval Bæbes and, if there’s any justice in the world, will come in time to be regarded as one of their catalogue’s strongest entries.