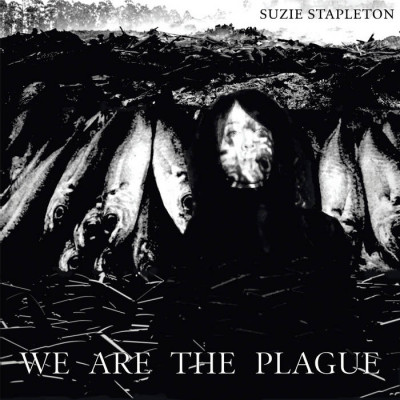 We Are The Plague by Suzie Stapleton

If only I had a quid for every time I restarted and overtyped this. With a title such as it is, We Are The Plague conjures up something different every day during the past several months that always seems to be overridden the following day. I suspect the only way I’m going to get this done and out of the way is to sit in a dark room with no TV or internet for a couple of days and just surround myself with this record for the entire duration. Which, as it turns out, is an excellent way to absorb the atmosphere and sheer humanity of it.

‘Humanity’ is an apt metaphor for this collection, as Suzie Stapleton’s record strips all sentiment and artifice of our species and holds up the starkest of mirrors to what remains of us and for the most part, we don’t come out of it well. That said, there seems to be just enough in us (or some of us) in one repeated word that just maybe places us somewhere slightly higher than actual murderous bacteria and viruses, but it’s a closer-run thing than it really should be.

Two things hit the listener when We Are The Plague starts up. First of all, there’s the intimacy of the instruments.  Everything sounds as though the performance is right next to you, muck distortion and soul-stirring reverb conspire to pull you in further towards something dangerous yet alluring. And then that voice comes in. Occupying a unique space and range somewhere between Maggie Bell and Nick Cave, Suzie Stapleton’s voice is one that has belief, passion and rage behind every single carefully-considered word, coiling round her guitar and other instrumentation and ensuring that you have no place to go until the hour has passed and you’re left wondering where you’re going to go from there.

The title track, as hinted at above, is a long list of how crap we are about almost everything and anything we do as part of our wider ecosystem. Reading like a damnable, diabolical chargesheet that is sadly hard to argue with, it’s tempered by her voice which whispers and cries with the same intensity so that even when she sings that “We are BLIND LOVE” (her capitals, not mine) ring out through the song’s chorus and ending, it feels both like mitigation and blame at the same time. This (rightly) accusatory tone continues into the following ‘Thylacine’, named for an Australian marsupial predator hunted into extinction almost 100 years ago, and despite it’s cyclical, Smoke Fairies-evoking gentle riff, it remains a blame-fuelled elegy to something precious and lost forever.

The album’s personal favourite of mine comes in the form of ‘September’ which encapsulates the album’s atmosphere and heart from the album’s centre. Starting off with a whisper of Field Songs-era Mark Lanegan, it subtly grows into a powerful and sensual argument for, well, the sort of thing that Soundgarden celebrated with Loud Love. Coupled with the more reflective and no less seductive ‘Don’t Look Up’, the Lanegan comparisons once more gently float to the surface, certainly as anyone who has experienced any of his Union Chapel performances could only agree with.

Spending the amount of time that I have with this record this year hasn’t just meant that I’m filing this almost six months late (although yes, I am. Soz) but I’ve also come to the conclusion that I still really don’t know what We Are The Plague really is. Post-punk Murder Ballads where the murdering is occasionally on a global scale? Possibly. A sort of Grunge retelling of Martina Topley-Bird’s wonderful and wide-ranging Quixotic? Eh, bit of a stretch but makes sense. A personal travelogue of the human spirit’s destructive tendencies and romantic / physical desires set to some really good music? Close enough. It’s certainly an incredible highlight of a strange and terrible year, punctuated by a longing for closeness that isn’t currently here and an unfortunate coincidental prescience keeping us all apart. This is the perfect soundtrack to that cycle, and will certainly serve as a fitting monument once it’s over.