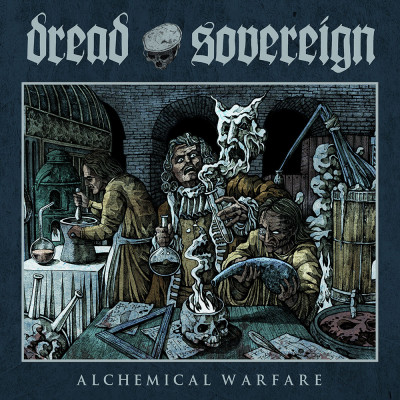 Primordial’s Alan “Nemtheanga” Averill is nothing if not prolific. As well as his folk/black metal day job, Averill has been a part of five other bands, while also having something of a journalistic career, even starting his own weekly podcast back in March. As the “other” band, Dread Sovereign have struggled to get much of a look in at times, however they have managed to squeeze out an E.P. and two full length albums since forming in 2013. Now, with the world on hiatus, Averill has found ample time to record a third ode to classic doom metal in Alchemical Warfare.

Dread Sovereign’s debt to their doom metal forebearers has been clear ever since their 2013 E.P. Pray to the Devil in Man, and Alchemical Warfare is no different. However there is more pace, more urgency on this album than its predecessors. Dread Sovereign have always subscribed to the more epic style of doom metal, reminiscent of Candlemass, Cirith Ungol or Saint Vitus more than the oppressively slow, grab-a-bong-between-beats sound that has gained prominence in the scene today, but here there are times where the music barely touches the genre. The band, rounded out by the mysteriously named “JK” (drums) and “Bones” (guitar), go to great lengths to prove they can rock out – there are strong elements of Motörhead and Venom here, particularly in the scummy barroom vibe that permeates the album. It’s doom metal played fast and loose, with all the static-laced interludes and long, drawn-out instrumental sections kept in to ramp up the tension even further.

Lyrically, there are some elements of a plot here – something about Sir Isaac Newton as he tries to discover the secret of alchemy. It is a subject matter that suits the tone – portentous, pretentious and tinged with an epic evil that fills every’s pore of the album with a sense of creeping menace. There are some interesting ideas here to sink your teeth into; Averill’s lyrics as always display an astonishing depth of knowledge. But really, we’re all here to listen to the Irishman sing about how the world is doomed yet again.

From the moment the witch’s cackle of ‘A Curse on Man’ fades into ‘She Wolves of the Savage Season’, the band set their stall early. This is a four-minute thrasher stretched out to over ten minutes, with extended instrumental passages of down-tempo riffing and extended guitar noodling. Some may be put off by this approach, wanting a quick satisfaction, but the building of atmospheric pressure to an eventual release is exactly what Dread Sovereign are all about. Only the galloping ‘The Great Beast We Serve’ is truly immediate, a straight-forward heavy metal stomper.

Elsewhere the band show off their influences – ‘Devil’s Bane’ is a Venom-inspired blast of darkness, while ‘Her Master’s Voice’ is straight out of the Black Sabbath playbook. ‘Nature is the Devil’s Church’ has hints of thrash metal throughout, while ‘You Don’t Move Me (I Don’t Give a Fuck)’ is itself a Bathory cover – a short sharp blast of punk explosiveness that ends the album in a frantic manner. It is very much at odds with the track immediately preceding it – ‘Ruin Upon the Temple Mount’ almost trips over itself with its ponderousness, taking almost four minutes before it even starts to get going, but eventually ending with Averill spitting venom, in full evangelical preacher mode.

Overall, Alchemical Warfare is an interesting diversion. Its heavy metal influences and fuzzy production make it seem like something from the late 80s, a forgotten curio dug up from the vaults. Yet, it is this retro charm that lends the band their appeal. It is hard to see Dread Sovereign overtake Primordial in Averill’s attentions, but there is something to be said for letting lose and paying homage to the masters every now and then, and when viewed through that lens, Alchemical Warfare is an album worth sinking your teeth into.